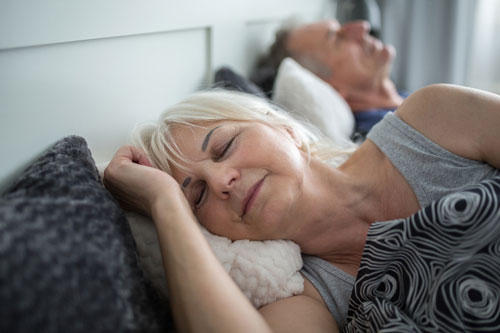 Alzheimer’s disease is one of the greatest failures of mainstream medicine. An estimated 5.7 million Americans suffer from it. And by 2050 that number is expected to more than double.[i]

But conventional doctors don’t have a clue about how to treat the disease…or even what causes it.

Now, a new study shows that Alzheimer’s creeps into your brain in the dead of night.

The research was conducted at the Washington University School of Medicine.

Dr. David Holtzman and his colleagues measured the level of tau in people with normal and disrupted sleep.[ii]

Tau is a protein linked to Alzheimer’s that is released by neurons in your brain while you’re awake. Tau gets cleared away while you sleep.

But if you don’t get enough sleep, or you wake up too much during the night, tau may accumulate faster than it can be swept away. It can then form toxic clumps that spread through your brain. This contributes to dementia.

The scientists found tau in people with disrupted sleep increased by more than 50%. This suggests that lack of sleep can prompt development of Alzheimer’s, they said.

Conversely, consistently getting a good night’s sleep could prevent it.

Dr. Holtzman said a link had already been established between poor sleep and beta-amyloid…another protein associated with Alzheimer’s. But “this study shows that sleep disruption causes the damaging protein tau to increase rapidly and spread over time.”

Dr. Holtzman stressed the importance of quality sleep. “Our brains need time to recover from the stresses of the day,” he said. “This and other data suggest that (quality sleep) may even help delay and slow down the (Alzheimer’s) disease process if it has begun.”[iii]

Getting a good night’s sleep is easier said than done for some of us. But if you suffer from insomnia, don’t resort to sleeping pills. There are safer, natural ways to get a good night’s rest…

Melatonin. This hormone is produced by the pineal gland, which is in your brain. It regulates your natural sleep cycle.

If you take a melatonin supplement, be careful not to take too much, which can actually harm sleep. Start with half the dosage recommended on the label. Typically, this will be about 1-2 mg. Melatonin works best for insomnia caused by jet lag or time change.[iv]

A cold room. Research has found that the best temperature for sound sleeping is between 60 and 67 degrees.[v]

Daily exercise. Even light exercise during the day helps you sleep at night.

Avoid blue light after dark. A Harvard Medical School study found that using blue light-emitting devices like computers, tablets, and smartphones just before bedtime can wreck your sleep. Blue light suppresses melatonin production. If you are a bedtime reader, stick to an old-fashioned printed book.[vi]