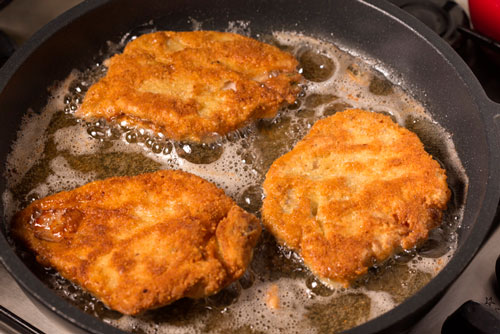 We’ve always known that fried foods were unhealthy. But we’ve never really known exactly how much damage they did…until now.

Existing evidence makes it clear that fried foods can trigger heart disease and type 2 diabetes. But researchers at the University of Iowa found  a clear link between fried foods and premature death.[1]

The scientists analyzed more than 20 years of medical data from 106,966 women. They ranged in age from 50 to 79. The women had been subjects of a study called the Women’s Health Initiative. (WHI).

The participants answered questions about their diets. It included detailed information about their consumption of different types of fried foods.

The researchers divided this information into three categories:

The scientists concluded that eating fried foods was linked not just to heart-disease and diabetes, but higher risk of death from ALL causes.

Participants who ate at one or more servings of fried food per day had an 8% higher risk of death than those who didn’t eat fried foods.

Other fried foods didn’t carry as strong a mortality link.

The researchers concluded that reducing consumption of fried foods, “especially fried chicken and fried fish/shellfish” could have a “meaningful impact across the public health spectrum.”[2]

Although all the subjects in the study were women, there’s no reason to think the results wouldn’t apply to men as well.

Chicken and fish are an important part of a healthy diet. But don’t fry them. Choose organic, free-range chicken. And look for oily, wild-caught fish such as salmon and mackerel.

Instead of frying, use another cooking method such as roasting, grilling, broiling, braising, or steaming.

The results can be just as delicious…and you’ll be doing your health a big favor.

Editor’s Note: Did you know there are five deadly heart attack triggers? And you probably did three of them before lunch! Find out what you need to know in order to avoid a massive coronary or a stroke. Go HERE.

Why You Should Never Eat in Front of the TV

The Lifesaving Food 90% of Us Don’t Eat Enough Of

5 Foods We Eat That Are Banned in Europe