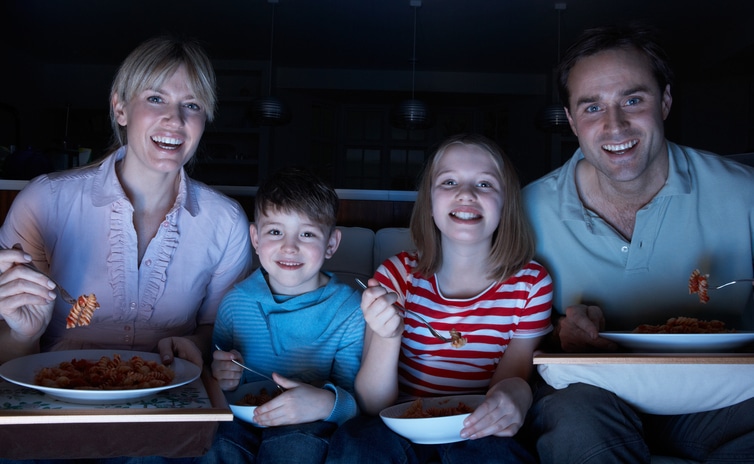 Eating dinner in front of the TV is a nightly ritual for many people. But a new study shows that it may damage your health.

Researchers found it can be bad for you even if you only have it on the background.1

University of Minnesota scientists examined videos of 120 families eating dinner. The researchers noted whether the TV was on and what their meals consisted of. And they asked families to answer questions about how much they enjoyed the meal.

Forty-three percent of the subject families kept the TV on for all their dinners.

The families who didn’t watch TV during meals ate significantly healthier foods. And they reported that they enjoyed their food more.

Families who kept the TV on in the background during dinner—but didn’t watch—ate healthier than families actively watching. But they didn’t eat as healthy as non-TV families.2

Amanda Trofholz was the lead author of the study. It was published in the journal Appetite. She said: “Families who see the family meal as a time to connect with and enjoy their families may be more likely to turn off the TV, have a higher quality meal, and enjoy the meal more.”

Recommended for You: Stop Male-O-Pause NOW

Know what it feels like to completely lose your sex drive? After age 30, your testosterone declines at a rate of 1% a year. By age 50, it’s 25% of what it once was….

But you don’t have to degenerate into an impotent old man. Because researchers at Harvard have discovered that flipping one biological switch in your body can defeat brain fog, give you the best sex of your life, and the body you always wanted—no matter how old you are.

Click HERE to find out how to do it from home.

The new research confirms previous studies that show TV watching while eating can sabotage your diet:

Researchers theorized that watching fast-paced, engrossing shows caused diners to eat mindlessly, shoveling in food without paying attention to how much they were eating.

So do your diet a favor. Turn off the TV while eating.

If you want to get thinner, there’s something else you should know… You can shed pounds of body fat—without cutting back on the foods you love.