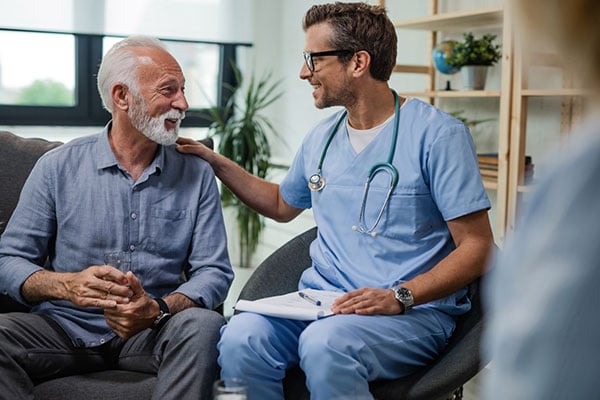 In most cases, it’s not fatal. It’s harmless. It doesn’t even affect a man’s health.

But in a few men, it spreads. Usually into bones. Then to the rest of body. At that point, it’s usually lethal.

The problem is that doctors have no reliable way to tell the harmless cancers from the fatal ones. So men often err on the side of caution by having treatment.

Usually this means having their prostate surgically removed, having radiation treatment, or both.

Surgery and radiation can be lifesaving. But the downsides are enough to make any man think twice. They often leave patients permanently impotent. And erectile dysfunction drugs may not help.

Another major side effect is incontinence. After treatment, a man may be no longer able to control his bladder.

As a result, men who get conventional prostate cancer treatment often end up with impaired or no sex for the rest of their lives. And they must wear adult diapers.

A major study shows there is a better, safer alternative.

It’s painless, non-invasive, and the chances of side effects are relatively low.

And it’s extremely effective in stopping the cancer from spreading.i

In the procedure, high-intensity sound waves target the tumor. They are delivered through an ultrasound probe inserted into the rectum.

This sounds worse than it is. Most patients report no pain and minimal discomfort.

Unlike chemo and radiation, it does minimal damage to nerves surrounding the tumor. It can be performed as an outpatient procedure.ii

HIFU: 100% Survival and Few Side Effects

The researchers checked on the patients five years after HIFU treatment to find out how many had died from their prostate cancer.

All of them survived.

That’s identical to surgery or radiation. But unlike those getting conventional treatments, the HIFU patients had low rates of loss of sexual function and bladder control.

Risk of erectile dysfunction was four times lower. The risk of urinary incontinence was 15 times lower in HIFU patients.iii

Professor Hashim Ahmed was the lead author of the study. He is the Chair of Urology at Imperial College London.

“This latest trial of focal HIFU suggests we may be able to tackle the cancer with fewer side effects,” he concluded.

The research was published in the journal European Urology.

This year, nearly 165,000 men in the United States will be diagnosed with prostate cancer. If you are one of them, show this article to your doctor before you commit to surgery or radiation.

HIFU may be a way to get rid of your cancer…without destroying your quality of life.