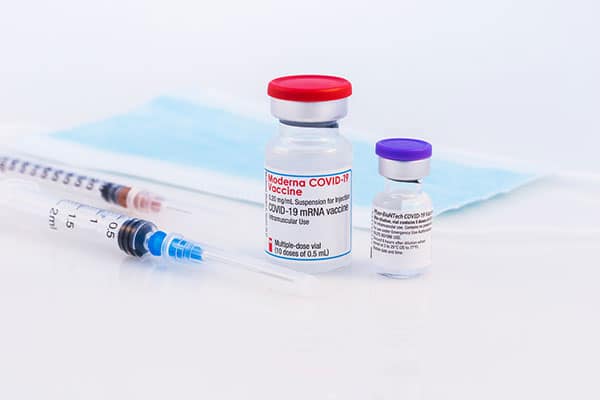 When COVID vaccines first became available in the U.S. earlier this year, doctors advised that you should not worry about which you got. You should simply take whatever kind you could get first.

But now, it is becoming clear that one vaccine offers stronger protection than the others.

Researchers at the University of Virginia examined blood from 167 people who received the vaccines. They found that Moderna produced 68.5 mcg of COVID antibodies per milliliter of blood compared to 45.9 mcg for Pfizer.ii

There are also signs that the higher Moderna antibody levels translate to greater real-life protection.

CDC data shows that two weeks after the second Pfizer shot, the vaccine was 91% effective in preventing severe COVID cases that resulted in hospitalization. But four months later, its effectiveness against hospitalization fell to 77%.iv

The Moderna vaccine showed no comparable decrease. It was initially 93% effective against hospitalization. Four months later, it was 92% effective.v

The third vaccine available in the U.S., the Johnson & Johnson vaccine, is less protective than either the Moderna or the Pfizer shots, according to the CDC data. It started out being 71% effective but fell to 68% after 28 days.

Pfizer has been the most widely administered vaccine in the U.S. Nearly 213 million doses have been put into American arms compared to 146.7 million of Moderna, and just 14.5 million for Johnson & Johnson (a one-dose vaccine).vi

Both the Pfizer and Moderna vaccines use the same mRNA technology. But the performance gap may be due to the fact that Moderna shots contain a higher dose. Each Pfizer shot contains 30 mcg of vaccine. Moderna has 100 mcg.vii

The higher dosage may be why slightly more Moderna recipients report side effects, albeit minor ones.

In trials, Moderna caused short-term fatigue and flu-like symptoms in 9.7% of patients, while 4.5% got a headache. The Moderna vaccine is also known to cause a short-lived arm rash.

Pfizer led to fatigue in 3.8% of patients and 2% came down with a headache. These symptoms typically clear up in a day or two.viii

Both the Moderna and Pfizer vaccines may cause harmless lymph node swelling in rare cases.

The J&J shot has a lower side effect rate than either Moderna or Pfizer.

No vaccine is risk-free, but studies show that serious side effects from COVID vaccines are rare. They include blood clots, severe allergic reactions, and heart inflammation. Studies show they occur about once every 100,000 shots.ix

Pfizer’s waning protection is one reason the FDA is recommending booster shots for people over 65. Those who received the Moderna vaccine may be less likely to need a booster.x

If you haven’t yet been vaccinated, new research makes it clear that Moderna is your best choice.