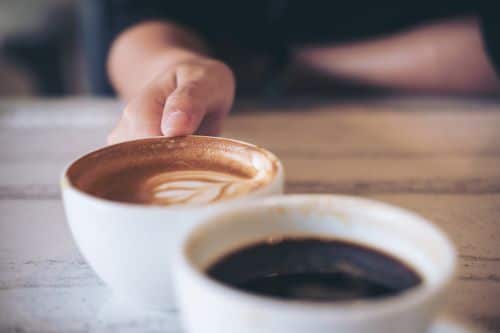 Drinking coffee has gone from a vice to a virtue.

Most of the research links coffee’s health effects to caffeine.

But what if you don’t like coffee? Can you get the same benefits with energy drinks or caffeine supplements?

When it comes to improvements in mental sharpness and mood, the answer is no, according to a new study published in the journal Nutrients.

Researchers looked at the effects of natural caffeine and synthetic caffeine.[1]

The researchers found that natural caffeine from coffee gave subjects a steady improvement in mood and cognitive function. Synthetic caffeine didn’t have the same effect.

“The synthetic caffeine had an initial spike after 30 minutes,” said Professor Boolani. It quickly faded after that.[2]

Nutrition expert Katie Boyd added: “Synthetic caffeine will absorb faster than the natural kind, which can cause anxiety side effects, a quicker spike, and faster crash.”[3]

So why do energy drinks and sodas use synthetic caffeine if it’s inferior?

The Soda Ingredient Banned in Europe…But Allowed in the U.S.

Once you learn how synthetic caffeine is made, you may never drink it again…

Most of the world’s synthetic caffeine comes from pharmaceutical companies in China, mainly in the industrial city of Shijiazhung.

Manufacturers there use a chemical process that starts with ammonia. But raw synthetic caffeine is phosphorescent—meaning it glows.

Aware that most people would shy away from a glowing beverage, manufacturers put synthetic caffeine through a second chemical process. They soak it in sodium nitrite, acetic acid, sodium carbonate and chloroform to remove the glow.[5]

The European Union and Japan have banned synthetic caffeine.[6]

The FDA is on record as having inspected a Chinese synthetic caffeine plant exactly once. They found numerous health and safety violations. But the substance is still perfectly legal in the U.S.

What Type of Coffee is Healthiest?

“Instead of up picking up an energy drink, next time just choose a coffee,” advises McGrath. And she points out that if you’re consuming synthetic caffeine, you’re also getting the sugar and unhealthy additives that usually go along with it in sodas and energy drinks.

But what type of coffee is best?

A coffee solution of each type of roast was introduced to mice cells. Then scientists observed its antioxidant and anti-inflammatory effects.

Light roast coffee had the most benefit, beating out medium roast by a few percentage points. City roast was about 10% less beneficial. And French roast dropped a substantial 25%.

But whether light or dark, choose organic coffee whenever you can…and skip sugar and artificial creamers.

Research on coffee and natural caffeine prove once again that the natural alternative is always the best choice.