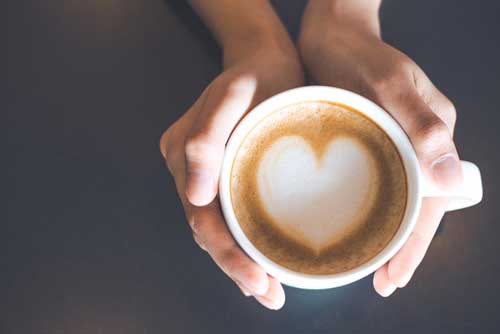 It was thought that the caffeine would dangerously raise their blood pressure and heart rate, and cause a heart attack. That advice turned out to be nonsense.

In recent years, researchers have found that coffee is one of the best natural remedies for your heart and overall health.

Now, a new study in Brazil finds that coffee lovers face a lower risk of the most dangerous type of artery blockages. The research was done by scientists at University of Sao Paulo’s School of Public Health.

They surveyed more than 4,400 adults about their coffee drinking habits. And they gave the subjects coronary artery calcium scans. This specialized X-ray looks for buildup of calcium-containing plaque in the heart’s arteries.1

As we have reported before, this type of hard plaque is far more likely to cause a heart attack than softer cholesterol-based plaque.2

The people in the study had an average age of 50 and were divided evenly between men and women. Most didn’t get much exercise and were overweight.

The researchers found that people who drank at least three cups of coffee a day were 63% less likely to have dangerous artery calcification compared to those who drank less coffee.3

But the good news didn’t extend to smokers or ex-smokers. Drinking coffee had no effect on their calcium buildup.

Andreia Miranda is a postdoctoral candidate at the University of Sao Paulo. She is lead author of the study.

“We found that habitual consumption of more than three cups a day of coffee decreased odds of coronary calcification,” she said.

But the unhealthy effects of smoking may “overwhelm the benefits of coffee intake on early cardiovascular disease injury,” she added. “So this impact of coffee may occur only in people who have never smoked.”4

The researchers said their study could not confirm if drinking four or five cups of coffee per day would deliver even more heart benefits. Their findings were recently published in the Journal of the American Heart Association.

The Healthiest Kind of Coffee

Other studies have found that coffee is not only good for your heart, but it helps prevent type 2 diabetes, fights liver disease, and keeps your mind and hearing sharp. It even protects against certain types of cancer.5

The wide-ranging health benefits come from the high levels of antioxidants and anti-inflammatory compounds in coffee beans. These substances act as a health shield for cells throughout your body.

But when you go into a coffee shop, you are confronted with a bewildering array of choices. It begs the question: Is one type of coffee healthier than another?

Researchers in Korea tested the effects of different roasting times on coffee beans.

They found that longer roasting robbed coffee beans of the potent chemical chlorogenic acid. It’s a phytochemical that gives coffee its antioxidant and anti-inflammatory properties.6

As one would think, light roast coffee provided the most health benefits, followed by medium roast, then City roast and dark roast.

So if you are a java junkie, drink up. And go for the light roast. Your heart will thank you.