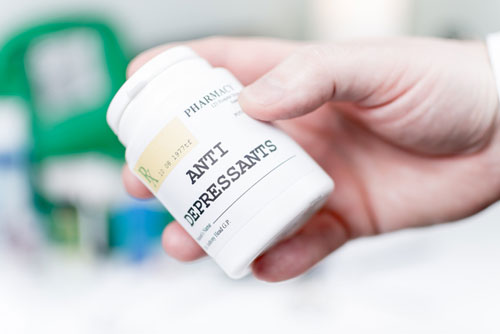 It’s not surprising that antidepressants are among the biggest-selling prescription drugs.

Depression is one of the most common mental disorders. About 17 million American adults have a major depressive episode each year. And doctors often prescribe antidepressants for other conditions like menopause, hot flashes, nerve pain, and insomnia.[i] [ii]

Those numbers make the findings of a new study extremely disturbing. It found that some antidepressants increase the risk of dementia by up to 50%.

Certain antidepressants are classified as anticholinergics. They work by blocking the effects of acetylcholine, a chemical that transmits messages in the nervous system.

Antidepressants in this group include amitriptyline and doxepin.

These drugs were already known to cause short-term mental side effects…memory loss and confusion among them. Scientists wanted to see if there were other issues.

Researchers at Britain’s University of Nottingham analyzed the medical records of about 59,000 dementia patients. They also looked at the records of 225,000 patients without dementia.

The scientists found that people who took anticholinergics daily for three years or longer had a 50% increased risk of dementia. They estimate that about 10% of all dementia cases could possibly be due to these drugs.

Anticholinergics include not only certain antidepressants, but also over-the-counter allergy and sleep aid medications.[v]

Dr. Tom Dening was the study’s co-author. He said that if you’re taking one these drugs, “alternative treatments should be considered where possible.”

Antidepressants aren’t the only way to treat depression… Talk to your doctor about trying a natural remedy. You can find these four depression solutions at most health food or drug stores:[vi]

St. John’s wort. This herb naturally balances the brain’s levels of the neurotransmitters norepinephrine, serotonin, and dopamine. Take it twice a day for a total dosage of 900 to 1,800 mg a day.

5-Hydroxytrptophan (5-HTP). This amino acid works well with depression that is combined with anxiety. It raises the body’s natural production of serotonin. It has also been found effective against insomnia. Suggested dosages are 100-200 mg taken twice per day.

SAMe. This naturally occurring amino acid-based chemical facilitates healthy nerve connections and boosts neurotransmitters. Some holistic doctors recommend it for older patients. This is because it has beneficial effects on arthritis and joint pain as well. A typical dosage is 200 mg twice daily.

You’re Better Off Taking a Sugar Pill Than an Antidepressant

Are Antidepressants to Blame for Skyrocketing Autism Rates?