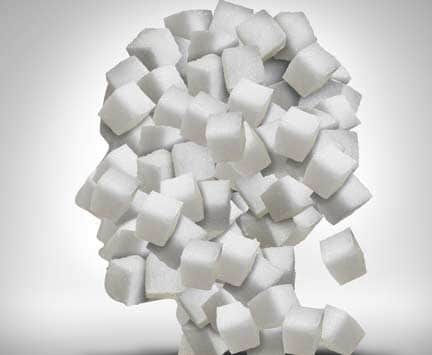 The average American consumes 19.5 teaspoons (82 grams) of sugar every day. That’s about 66 pounds a year.1

And it’s killing us.

It found that a diet high in sugar increases your Alzheimer’s risk. For the first time, researchers have uncovered a direct molecular link between sugar and the brain-robbing illness.2

Researchers from the University of Bath and King’s College, both in England, analyzed cadaver brain samples. They compared tissue from people who had Alzheimer’s when they died to those who didn’t have it.

Scientists knew that previous research had shown that sugar can damage proteins in cells. This happens through a process called glycation. This is when a sugar molecule bonds to and disrupts the function of a protein.

The researchers found that in the early stages of Alzheimer’s, glycation damages an enzyme called macrophage migration inhibitor factor (MIF). MIF is crucial to Alzheimer’s prevention. It stops the buildup of abnormal proteins in the brain, which are the hallmark of the disease.

When the enzyme can’t function properly because of glycation from high sugar intake, proteins accumulate and Alzheimer’s sets in.3

Professor Jean van den Elsen is with the University of Bath’s department of biology and biochemistry. He is one of the study’s authors.

“Normally MIF would be part of the immune response to the build-up of abnormal proteins in the brain,” he said. “We think that because sugar damage reduces some MIF functions and completely inhibits others, that this could be a tipping point that allows Alzheimer’s to develop.”4

Researchers say they hope treatments can be developed that keep MIF functioning to prevent Alzheimer’s. Their study was published in the journal Scientific Reports.

In the meantime, the new study makes it more important than ever to avoid sugar.

Dr. Omar Kassaar of the University of Bath is a co-author of the study. “Excess sugar is well known to be bad for us when it comes to diabetes and obesity,” he said. “But this potential link with Alzheimer’s disease is yet another reason that we should be controlling our sugar intake.”

That’s not as easy as it sounds. Big Sugar has worked furiously for decades to make sure food labeling laws allow them to hide sugar under many different names.

Most of us know that “high fructose corn syrup” is another name for sugar. But there are dozens of other food label weasel words used to hide added sugar.

Have you heard of drimol, flo malt, sucrovert, or versatose? They are all sugar aliases used on labels to fool consumers.

For a list of 80 names the food industry uses to hide sugar, go here.

And if you’re worried about Alzheimer’s, there’s something else you should know… The decades of research on this brain-healing herb is impressive to say the least… And you can get it now for just pennies a day.

Get all the details on this memory miracle, HERE.