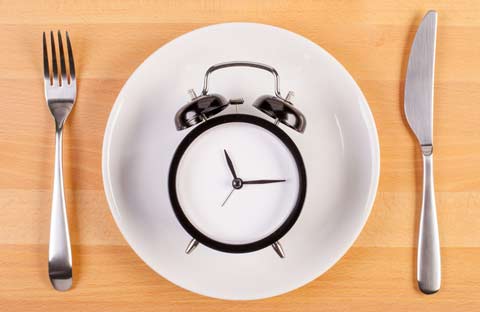 When it comes to weight loss, timing is everything.

That’s the finding from a new study that shows when you eat is as important to your waistline as what you eat.

The research found that eating at the wrong time not only sabotages your weight loss efforts, it leads to higher blood sugar levels, bad cholesterol, and other markers for heart disease.

Researchers at the Perelman School of Medicine at the University of Pennsylvania took healthy-weight adults and put them on two different eating schedules.

First, they instructed participants to eat three meals and two snacks between 8 a.m. and 7 p.m. for eight weeks. Then the subjects took two weeks off from the regimen. During this time, they could eat any time they wanted.

Finally, the group was put on a later eating schedule. They ate three meals and two snacks between noon and 11 p.m. for eight weeks.

During both regimens, researchers did a detailed analysis of the subjects’ weight, metabolic, and hormonal changes.

When participants ate earlier, they were more likely to lose weight. They had a faster metabolism, burning more calories. Their insulin, blood sugar, cholesterol, and triglyceride levels all were better when they ate early.1

Professor Kelly Allison led the study. She is director of the Center for Weight and Eating Disorders at the University of Pennsylvania.

“We have an extensive knowledge of how overeating affects health and body weight,” she said. “But now we have a better understanding of how our body processes foods at different times of day.”2

The research shows that eating earlier in the day not only promotes weight loss, but helps prevent risk factors for diabetes and heart disease, she said.

Dr. Namni Goel is a co-author on the study. She said: “Eating later can promote a negative profile of weight, energy, and hormone markers—such as higher glucose and insulin, which are implicated in diabetes, and cholesterol and triglycerides, which are linked with cardiovascular problems and other health conditions.”

How Late Eating Sabotages Your Diet

Tests on the subjects showed that eating earlier in the day is more compatible with natural hormone cycles. Ghrelin, a hormone that stimulates appetite, was found to peak during daylight hours. But leptin, a hormone that makes you feel full, peaked at night.3

If you’re trying to lose weight, don’t eat within four hours of bedtime. It will help you get rid of those unwanted pounds and improve your overall health.

Editor’s Note: What’s the secret to lasting weight loss? Here’s a hint: It starts—and ends—in your brain. But it has NOTHING to do with willpower… Get all the details HERE.