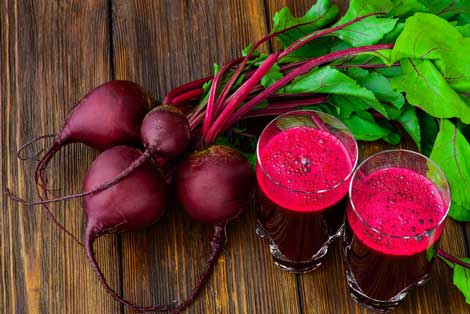 You already know that exercising helps keep your body healthy and your mind sharp.

Now, a new study has found a simple way to bolster your workout’s positive effect on your brain. Researchers have discovered that seniors who drink a certain vegetable juice right before exercising can transform their brain into one that performs like a much younger brain.

Scientists at Wake Forest University gathered 26 adults who were 55 or older. They had the participants exercise on a treadmill for 50 minutes three times a week for six weeks. The pace was “moderately intense.”

Half the participants drank beet juice before each workout. The other half were given a placebo.

At the end of the six weeks, the researchers used MRI scans to analyze participants’ brains.

People who consumed beet juice before exercising showed increased strength in both the structure and functioning of their brains. Their somatomotor cortex was 25% stronger than those who drank a placebo. This is the region of the brain that helps to control body movement.1

The beet juice group also showed 19% greater connectivity between the somatomotor cortex and the insular cortex. This is associated with better memory and emotional control.2

Why Beets Are Brain Food

What’s behind the brain-strengthening power of beets? Researchers point to their high concentration of inorganic nitrates. The body converts nitrates into nitric oxide, which boosts delivery of oxygen to the brain.

Scientists found that participants who drank beet juice had much higher nitrate levels than the placebo group after exercising.

Dr. W. Jack Rejeski is a professor of health and exercise science at Wake Forest. He led the study.

“Nitric oxide is a really powerful molecule,” he said. “It goes to the areas of the body which are hypoxic, or needing oxygen, and the brain is a heavy feeder of oxygen in your body.”

Dr. Rejeski said that for seniors “adding a beet root juice supplement to exercise resulted in brain connectivity that closely resembles what you see in younger adults.”3

There is another benefit to drinking beet juice before a workout… The nitrates improve oxygenation to the muscles. This means you won’t tire as easily. Previous studies have found that beet juice also lowers high blood pressure.4

Get Beets into Your Diet

In the study, participants drank beet juice with 560 grams of nitrates. You can get this amount from the juice of about a half pound of beets or about 1 ½ average sized beets.5

The fresher the beets and the darker the color, the more nitrates the beets contain. So you want to be sure to juice red beets—not golden or white varieties.

If you don’t want to make your own juice, you can buy commercial beet juices at health food stores or online. Wake Forest researchers used an organic brand called Beet It.

Add beet juice to your exercise routine. Your body—and brain—will thank you.

And if you’re worried about staying mentally sharp as you grow older, there’s something else you should know… The study results on this natural herb extract are so promising, Big Pharma is trying to turn it into a drug. Get all the details here.