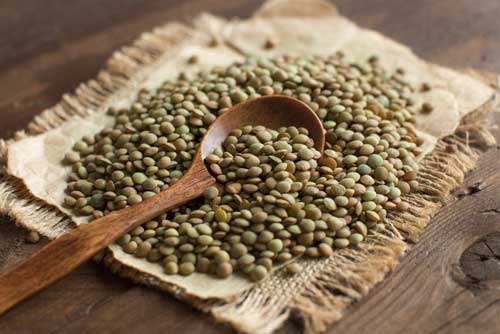 If you walk into your doctor’s office and are diagnosed with type 2 diabetes, chances are you’ll walk out with prescription for metformin.

It is the nation’s leading diabetes drug treatment. It has been prescribed to 120 million people worldwide. It lowers blood sugar by an average of 25%.i ii

But a fascinating study shows there’s a simple way to reduce blood sugar even more than metformin can.

And it requires no drugs, no exercise, and no supplements.

Research from the University of Guelph has found that replacing starches and carbs like potatoes and rice in your diet with lentils can have a hugely beneficial effect on your blood sugar levels.iii

Scientists found that substituting lentils for a half serving of rice caused a 20% drop in blood sugar. Eating lentils instead of potatoes made an even bigger difference, with a 35% blood sugar decrease.

That’s even better than metformin.

Professor Alison Duncan was one of the study authors. She notes that lentils are a type of vegetable called pulses. Others include peas and beans. “Pulses are extremely nutrient-dense foods that have the potential to reduce chronic diseases associated with mismanaged glucose levels,” she said.iv

The study followed 24 healthy adults. During four different meals they were given different dishes to eat containing different amounts and types of lentils:

The subjects were then served another four meals. But this time, potatoes were substituted for rice.

The researchers tested subjects’ blood sugar levels before they ate the meals and then again two hours after.

In all cases, the lentils dramatically reduced blood sugar spikes compared to when the subjects ate either white rice or potatoes alone.

The small green lentils had a slightly greater protective effect than other types of lentils, but the difference was not significant.v

Professor Duncan explained that lentils are packed with fiber that slow digestion and the release of sugar into the bloodstream. This ultimately brings down glucose levels.

“This slower absorption means you don’t experience a spike in glucose,” she said.

Since high blood sugar levels over time can lead to type 2 diabetes, eating lentils seems to lower risk of developing the disease.

This lentil salad is a tasty way to keep your blood sugar under control.

Reduce heat and simmer, uncovered, for 15 to 25 minutes, until lentils are tender. Drain. Transfer to a large bowl.

Toss hot lentils with tomatoes, dill, scallions, basil, oil, vinegar, pepper, and the remaining ½ teaspoon of salt, or to taste.

There is an epidemic of diabetes in America. But drugs are not the only—or even the best—solution. Lentils and the fiber they provide are powerful medicine against high blood sugar.

Subscribe to our newsletter, Independent Healing. Each month it brings you important health information you won’t find anywhere else. To learn more, go HERE.