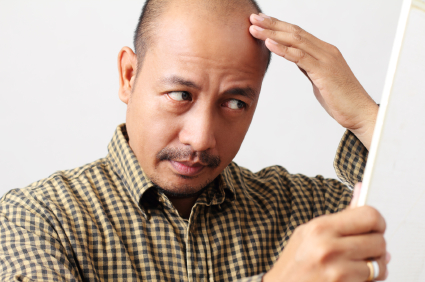 Men have been searching for a cure for baldness ever since…there have been men.

In the 1980s, Big Pharma came up with the drugs Rogaine and Propecia. But they don’t work for everyone. And they can have serious side effects.

Rogaine is the brand name for minoxidil. It is topically applied to the scalp. Side effects include irregular heartbeat, chest pain, swelling of the hands and feet, and difficulty breathing.i

Propecia is an oral medication that was originally intended to treat enlarged prostates. It was found to also cause hair regrowth. But its side effects include decreased libido, erectile dysfunction, depression, testicular pain, and male breast cancer.ii

Until recently, Rogaine and Propecia were the only hair loss treatments approved by the FDA.

Now, there is a third FDA-approved baldness treatment. But it’s not a drug. It’s low-level laser light.

The devices used to apply the laser light are called laser combs. Some of the devices also come in the form of wearable caps.

For many years, it was well established that laser light could help regrow hair. But the treatments typically required large, expensive equipment.

But in recent years, the technology has improved. The devices are now smaller and more affordable.

A study at the University of Miami in 2014 was among the first human trial to show that low-level laser treatment works. It found that it stimulated hair regrowth in both men and women.iii

And unlike baldness drugs, none of the subjects had any side effects. There was little or no discomfort during the treatments.

A 2019 Harvard study split 110 men with thinning hair into two groups. One was treated with a laser comb. The other used a placebo device that did not emit laser light.iv

The subjects were treated three times a week for 26 weeks.

Afterward, the laser comb group had more hair density. But the placebo group had lost hair.

A 2020 review of laser comb clinical studies at the University of Miami concluded that low-level laser light therapy “appears to be effective for treating hair loss in both men and women.”v

Laser combs are now widely available online. Prices range from $200 to $400. They are not typically covered by insurance.vi

If you aren’t ready to spring for a laser comb, you may be interested to know that two natural supplements are linked to hair growth. They are both safe and free of side effects:

Vitamin B7 (biotin). Many alternative practitioners recommend vitamin B7 for people with thinning hair or weak nails. Cauliflower, egg yolks, and mushrooms are the best food sources of B7. Egg whites actually interfere with your body’s ability to absorb B7. So stay away from them if you have hair problems.

B7 supplements are widely available. Take 5,000 mcg a day.vii

The best way to ensure you get enough vitamin D is to take a supplement. We recommend 5,000 IUs a day.

Be sure to take the D3 form of the vitamin. It is more readily absorbed that D2, which is also sold in supplement form.

Big Pharma would like you to think that it has the only answers to thinning hair. The truth is, you can get your hair back without drugs or the side effects they cause.