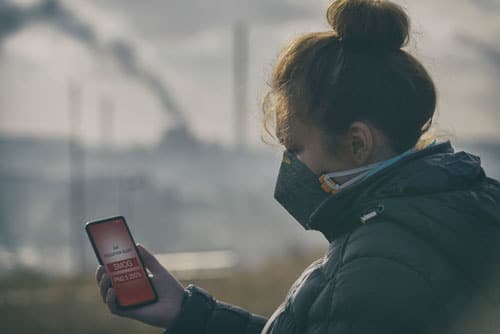 You may have read the news stories about cities in India and China that have air pollution so thick that people have to stay inside their homes to avoid getting sick.i

Anyone who has visited Los Angeles can tell you that the U.S. has its own air pollution problems.

You may figure you’re not being harmed by air pollution if you don’t live a big city with smog.

The Invisible Threat to Your Heart

But an alarming study shows that your health can be threatened even if you live in a small town where the air looks clean.

Researchers have found a widespread, invisible pollutant in places previously considered to have clean air. The hidden toxin causes your heart to undergo something scientists call “remodeling.”ii

This is not a good thing.

The study was conducted by scientists from Queen Mary University of London. They looked at people without underlying heart problems. They checked the subjects’ heart function, and the size and weight of their hearts.

The researchers found a clear link between exposure to a type of air pollution called PM2.5 and enlarged right and left heart ventricles.

Particles this tiny are extremely dangerous. When you inhale them, they travel deep into your lungs. From there, they can go to your heart.

The ventricle enlargement seen in the study is a type of “cardiac remodeling.” This refers to any changes in the size, mass, shape, and function of the heart.iv

The people in the study did not live in the sort of big cities you might associate with air pollution. Most were in smaller towns where the air looked and smelled clean.

The primary source of PM2.5 is car and truck exhaust. Many small towns have major highways nearby.v

Dr. Nay Aung led the study. He said the effects of PM2.5 on the heart are comparable to having high blood pressure or never exercising.

3 Ways to Protect Yourself from Invisible Air Pollution

How can you protect yourself from PM2.5? Here are three strategies:

Most cars don’t have a climate control system that can filter out PM2.5. The exceptions are high-end cars made by BMW, Mercedes, and Tesla.

But you may be able to buy an aftermarket HEPA filter to replace your car’s cabin filter. Bosch makes one.

You have only one heart. Don’t let the invisible PM2.5 air pollution damage it.