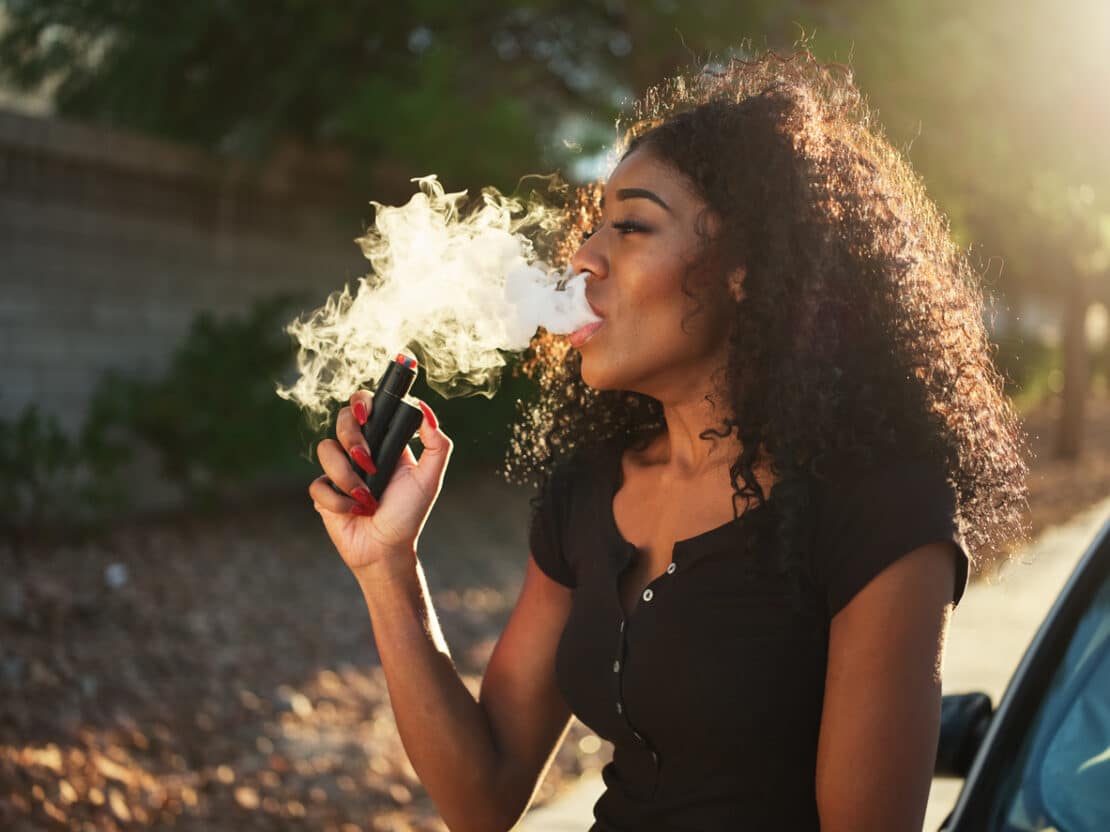 For tobacco smokers, e-cigarettes can seem like a win-win.

E-cig vapor does not contain the carcinogenic tars in tobacco smoke. So the risk of cancer is likely lower.

Vaping also doesn’t produce secondhand smoke that can poison people around you.

And e-cigs save money. They are 40% cheaper per puff than regular tobacco cigarettes.i

But a major study has found that vaping carries an unexpected—and potentially deadly–health risk.

Researchers from University of California San Francisco (UCSF) asked nearly 70,000 subjects questions about their smoking habits. And they gathered detailed heart health information on the participants.ii

But they also discovered that most people who vape continue to smoke regular cigarettes as well. This is a particularly deadly combination.

These “dual users” increase their heart attack risk by 460%.

Dr. Stanton Glantz is a professor of medicine and Director of the UCSF Center for Tobacco Control Research and Education. He was the senior author of the study.

“The finding of increased heart attack risk for e-cigarette use is particularly troubling,” said Dr. Glantz. “Because most people who use e-cigarettes continue to smoke cigarettes.

“Using both products at the same time is worse than using either one separately. Someone who continues to smoke daily while using e-cigarettes daily increases the odds of a heart attack by nearly a factor of five.”iii

The research also found some good news for smokers who quit.

“The risk of heart attack starts to drop immediately after you stop smoking,” said Dr. Glantz. “Our results suggest the same is true when they stop using e-cigarettes.”iv

The study was published in the American Journal of Preventive Medicine.

Electronic cigarettes deliver an aerosol vapor of nicotine and other flavors by heating a liquid. They are sometimes promoted as a safer alternative to conventional cigarettes.

It’s true that e-cigs do deliver lower levels of carcinogens. But, unlike tobacco cigarettes, they emit ultrafine particles that contain other toxins. They include formaldehyde and heavy metal particles.

The researchers say these toxins are what increase heart risk. And they also boost the risk of non-cancer lung diseases such as emphysema.

In fact, the majority of smoking deaths are not the result of cancer. They are caused by heart disease and lung illnesses.

The Best Way to Quit Smoking

If you are trying to stop smoking, e-cigs likely won’t help you. They may actually make it more difficult to quit.

“E-cigarettes are widely promoted as a smoking cessation aid,” said Dr. Glantz. “But for most people, they actually make it harder to quit smoking, so most people end up as so-called ‘dual users’ who keep smoking while using e-cigarettes.”

And as the study found, this is just about the worst thing you can do for your heart.

A separate study by University of Oxford researchers found that behavioral counseling may be the best way to kick the habit. It increases the chances of quitting by between 40% and 60%.

Behavioral therapy or counseling is a way to unlearn habits. It involves discussions of thoughts and feelings when the smoker practices the behavior. These discussions can be with professional counselors or even friends or spouses.

They can include individual in-person sessions, telephone counseling, group sessions, and written advice. All were found to be effective, although individual counseling worked best.

There are two easy ways to get behavioral counseling:

1-800-QUIT-NOW (1-800-784-8669). Calling this toll-free number will connect you directly to your state’s quit line. All states have trained coaches who provide phone counseling.

Stay away from smoking-cessation drugs like varenicline and bupropion.

Studies show they don’t improve your chances of quitting. And they are linked to depression, seizures, insomnia, headaches, and high blood pressure.

Rush Limbaugh Lung Cancer Nightmare: The Natural Extract That Can Save Smokers

One Simple Strategy Increases Your Chances of Quitting Smoking by 583%