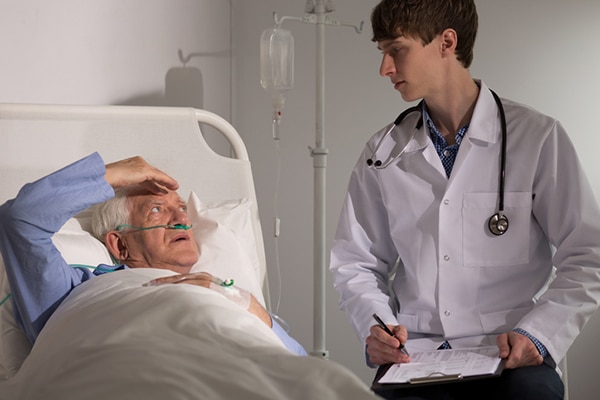 As we age, we face an increasing possibility of having surgery.

More than half of all surgeries (53%) are performed on people over 65.i

Heart disease, cancer, fractured bones, and any number of other medical conditions might force us under a surgeon’s knife.

There is one surgical complication that seniors need to worry about more than any other. And it’s something that doctors rarely mention to patients.

And here’s the scariest part…

The standard treatment for it is largely ineffective. What’s more, it can cause side effects that can be worse than the actual complication itself.

The #1 Surgical Complication in Seniors

The most common complication in seniors having an operation is post-surgical delirium.ii

This is when a patient becomes confused and disoriented following surgery. They may not know where they are…say things that don’t make sense…or try to remove their IVs and get out of bed.

It can start within hours of surgery.iii

The first-line treatment for post-surgical delirium is anti-psychotic medications (APMs). They are supposed to bring patients back to their senses.

But a major study found that these drugs are ineffective for post-surgical delirium. And worse, they put you at risk for serious, even fatal, health problems.iv

Researchers from Brigham and Women’s Hospital in Boston analyzed heart surgery patients’ records from more than 700 hospitals nationwide. All the patients were over 65. They had surgery between 2004 and 2014.

Anti-Psychotic Drugs Can Have Deadly Side Effects

Post-surgical patients in the study took APMs for four days to one week. Some were prescribed the drugs as they left the hospital.

The most common post-surgical APMs are haloperidol, olanzapine, quetiapine, risperidone, aripiprazole, and ziprasidone.

The study could find no evidence “that APMs reduce delirium.”

The drugs “increase the risk of cardiac arrhythmia, stroke, pneumonia and even death,” the study concluded.v

Researchers also found that some hospitals showed a tendency for “excessive dosing” of anti-psychotic medications.

The study said that the findings are “worrisome” due to “the lack of consistent evidence of the benefit of APMs for delirium and their potential harm.”

Post-surgical delirium usually goes away in under a week with or without APMs, the study showed.vi

The research was published in the Journal of the American Geriatrics Society.

3 Ways to Protect Yourself from Post-Surgical Delirium

If you are undergoing surgery, there are steps you can take to protect yourself from delirium and the drugs used to treat it:

Talk to your doctor. Many doctors may not realize that APMs are dangerous after surgery. Before your procedure, show your doctor this article. Explain that you want to avoid taking an APM.

Show your physician all drugs and supplements you take. Suddenly stopping these, including alcohol or sleeping pills, could bring on delirium.

Ask family and friends for help. Caregivers can help you deal with delirium without drugs. Surgery can be an overwhelming experience. That in itself can bring on confusion.

After surgery, you’re in a strange room, in a strange bed, and not in your own clothing. All of this can be disorienting.

Ask your family and friends to:

You probably won’t feel like yourself after surgery, but as soon as possible after the procedure, ask your nurse if you can try to move.

Getting up and walking is ideal. But even using a handgrip exerciser while lying down will help.

And try to engage your mind, too. Even though you may not feel well, converse with your caretakers, do puzzles, read a book…anything to exercise your brain.

Being as active as possible is the key to a speedy recovery.