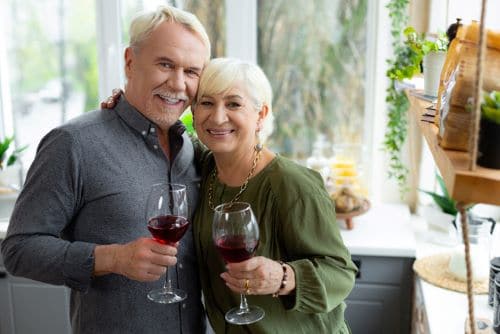 Like a glass (or two) of wine with dinner?

A major new study of nearly 20,000 Americans shows that moderate drinking actually helps preserve your memory and thinking skills as you get older.

The optimal number of drinks for peak mental performance is 10 to 14 a week, the research shows.

A least three previous studies back up the findings…

Scientists at the French National Institute of Health and Medical Research followed the health of more than 9,000 people for more than 30 years.[iii]

Non-drinkers and heavier drinkers were the most likely to suffer brain problems. Moderate drinkers had the lowest risk of cognitive issues.

Teetotalers were 47% more likely to be diagnosed with dementia than moderate drinkers.

Dr. Maiken Nedergaard is co-director of the Center for Translational Neuromedicine at the University of Rochester Medical Center. She is lead author of the new study. She and her colleagues exposed mice to various amounts of alcohol.

Mice given the human equivalent of two-and-a-half drinks a day had far less brain inflammation than those given no alcohol.

They also had a more efficient glymphatic system. That’s the brain’s cleaning system.

The glymphatic system pumps cerebrospinal fluid into the brain—mostly at night while you sleep—to flush away waste such as the proteins beta amyloid and tau. They are markers of Alzheimer’s disease and other forms of dementia.[v]

Lastly, a study from Georgetown University found that a substance in red wine is linked to healthy brain aging.[vi]

Resveratrol is a compound in red wine, red grapes, pomegranates, raspberries, and chocolate. It supports a strong blood-brain barrier, say the researchers.

This is an important factor in stopping harmful immune molecules from reaching the brain and wreaking havoc.

The research found that problematic molecules that lead to age-related brain fog often come from the blood. And they make it to the brain when the blood-brain barrier lacks the proper support.

Dr. Charbel Moussa was coauthor of the new study. Resveratrol acts like a gatekeeper at the blood-brain barrier, he said.

“Resveratrol imposes a kind of crowd control at the border of the brain,” said Dr. Moussa. “(It) seems to shut out unwanted immune molecules that can kill neurons.”

The study examined 38 people with age-related cognitive decline. Half were given a placebo. The other half were treated daily with resveratrol for a year.

The patients getting resveratrol had a 50% reduction in levels of a molecule that weakens the blood-brain barrier.

Red wine is the best choice. Not only does it contain resveratrol, but it has beneficial compounds called procyanidins. They are linked to heart health, lower stroke and cancer risk, and longevity.

Most big wine shops carry it. If you can’t find it, go for cabernet sauvignon. It is also high in procyanidins.

Subscribe to our newsletter, Independent Healing. Each month we bring you important health news you won’t find anywhere else. To subscribe, go HERE.

Is Alcohol Unsafe in Any Amount?