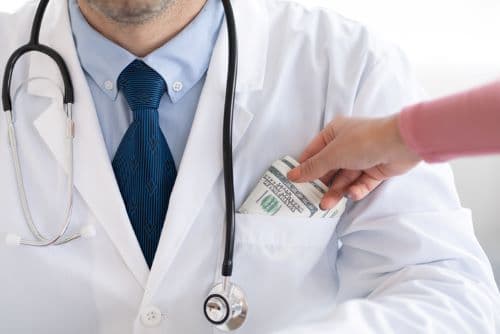 A big pharmaceutical company has admitted to bribing doctors.

Novartis Pharmaceuticals paid $678 million to settle a case in which it was accused of giving thousands of dollars to doctors in return for prescribing the company’s medicines.

Besides cash, the drug giant lavished doctors with expensive dinners, wine tastings, sporting events, and even trips to Hooters.

The settlement stems from 2013. That’s when the U.S. joined a lawsuit against Novartis that had been started two years earlier by a whistleblower…one of their former sales representatives.

He said the company set up a “speakers program.” Doctors appeared but “gave no meaningful presentations,” said federal prosecutors. The physicians were there to be showered with cash, alcohol, and costly meals.[1]

As bad as all that is, it’s certainly not the first time Big Pharma has been caught bribing doctors…

It’s easy to find out if your doctor is accepting drug company money. By law, pharmaceutical firms must disclose doctor payments.

The nonprofit investigative website ProPublica tracks the payments. Simply go to the site and type in your doctor’s name and the state in which he or she practices.

It’s important to make sure that when your doctor prescribes a drug to you they are thinking about your health…and not a healthy check from a pharmaceutical firm.