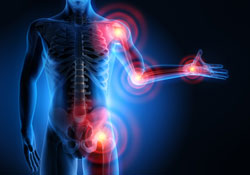 Heart disease is a good answer. It kills more Americans than anything else.

Cancer comes in a close second.

Alzheimer’s is another good guess, especially since there is nothing doctors can do to stop it or even slow it down.

Diabetes is also terrible and has reached epidemic proportions. Nearly half of American adults now have prediabetes or full-blown diabetes.

The truth is, there’s one health condition that is far worse than any of these.

That’s because it causes all of these deadly illnesses and many more.

A recent medical journal review called inflammation “the most significant cause of death in the world today.”[i]

Some inflammation is necessary. It’s the body’s natural response to injury and illnesses. It involves white blood cells and other immune substances attacking viruses and bacteria that invade your body. Without inflammation, you would quickly die. Infections would take over your body.

But chronic inflammation is another story.

It happens when your body always has inflammation, even when you’re not fighting an infection or healing from an injury.

It can be caused by autoimmune disorders like arthritis. Things like smoking or exposure to pollution can trigger it.

Here are the best natural approaches to fighting inflammation:

When you stop chronic inflammation you eliminate the root cause for the most feared illnesses of our time.

Editor’s Note: Discover other natural, nondrug methods to improve your health by reading our monthly journal, Independent Healing. It’s your best source for unbiased, evidence-based health information. To find out how to subscribe, go HERE.

Fight Inflammation With the Tree of Immortality

One Exercise Wipes Out Chronic Inflammation

Eliminate Pain and Inflammation with a Little Spice