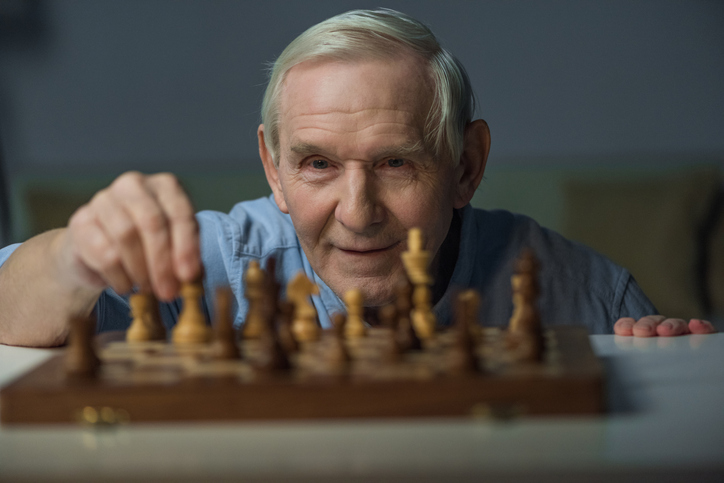 They were older folks who could feel their mental sharpness slipping away. But they didn’t have dementia…at least not yet.

They had bouts of forgetfulness, but they could still function in everyday life.

Scientists did a unique experiment to find out if their thinking skills could be restored. By the end of the study, one group of seniors took nearly 10 years off their brain age.

Here’s how they did it…

The study was published in the online version of the journal Neurology.[1]

Researchers recruited 160 subjects with an average age of 65. None were active. All of them struggled with cognitive impairment that did not rise to the level of dementia.

Researchers divided the subjects into four groups at random…

Group one did 35 minutes of aerobic exercise, three times weekly. This included walking, cycling, or jogging.

Group three did a combination of exercise, eating a healthy diet, and getting nutrition counseling.

Group four made no changes. They were the control group.

At the beginning of the study, researchers gave all the subjects tests that measure thinking ability. After six months, they were tested again.

As you might expect, the control group had no cognitive gain. In fact, their thinking skills regressed slightly.

And group two, which ate a healthier diet, also showed no improvements.

Group one, which did aerobic exercise, improved their thinking skills to the point that their brains appeared six years younger.

Group three, which did both aerobic exercise and ate a healthier diet, had the biggest gains. They reversed their brain age by an average of nine years.[2][3]

Dr. James Blumenthal of Duke University Medical Center was the study’s lead author. The exercise and diet changes in the study may “have the potential to delay the onset of dementia for years,” he said.[4]

Specifically, the subjects’ “executive function” was sharpened. That’s the set of mental skills you need to plan and organize tasks and manage your time. If executive function is impaired, it makes it hard to work or to live independently.[5]

The Way to a Better Brain

If you feel like your thinking skills are declining with the passing years, follow the regimen described in the study…

Do regular aerobic exercise: The study participants walked, jogged, or cycled for 35 minutes three times a week. They also did 10 minutes of warming up, for a total of 45 minutes each session.

If you’d like to take less time exercising with no loss of health benefit, we recommend high-intensity interval training (HIIT).

The basic formula for HIIT is simple. It only takes about 15 minutes. And you can apply the HIIT principal to just about any type of cardio exercise, including running, biking, swimming, rowing, or using an elliptical or step-climber machine.

Warm up for 3–5 minutes…then sprint at an all-out pace for the next 30–60 seconds. Then go slow for the next minute or two to catch your breath.

Repeat this process 5–7 times and then cool down for at least two minutes.

Eat a high-fiber diet: Make a point of eating a lot of vegetables. Carrots, beets, broccoli, and artichokes are particularly fiber-rich. Fruits such as apples, oranges, and strawberries are good fiber sources. Also nuts, beans and legumes (peanuts, peas, lentils).

Wearing a Tie Hurts Your Brain
3 Foods for a Bigger, Better Brain
Need a Quick Burst of Brain Power? Do This