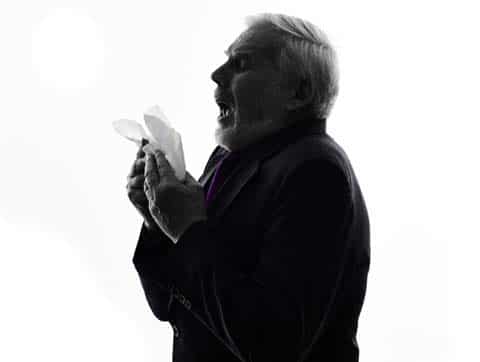 We’ve all had the experience of being a victim of someone else’s sneeze. We try not to think about how many of their germs will reach us.

And if you’re in the hospital, the situation has greater urgency. That’s because someone who sneezes could pass along antibiotic-resistant superbugs. These potentially fatal bacteria are rampant in some hospitals.

A new study set out to answer the question of how long germs survive after a sneeze—and how far they travel.

The research was conducted by scientists at Queensland University of Technology in Australia.1

Sneeze Germs Travel Across the Room

The researchers had the two participants cough and sneeze in a specially constructed room. It contained open Petri dishes at various distances from the subjects, up to 13 feet away.

They tested the Petri dishes for live bacteria at time intervals after a sneeze. They tested after 10 seconds, 20 seconds, 40 seconds, 15 minutes, and 45 minutes.

The researchers found that some germs from a sneeze traveled all the way to farthest petri dish, 13 feet away. And although 90% of the bacteria died within 10 seconds, some of the germs survived in all the petri dishes for up to 45 minutes. There was enough bacteria left to spread disease.

With further analysis, the researchers discovered that the lifespan of the bacteria depended on where in the lungs they originated.

Professor Lidia Morawska is director of the Queensland University of Technology International Laboratory for Air Quality. She led the study. Sneeze droplets “carry different ‘loads’ of bacteria” depending where in the respiratory tract they originated, Professor Morawska explained.

Sputum from lower in the lungs contains the most bacteria. And when it is expelled in a strong sneeze or cough, it remains infectious the longest.2

Professor Morawska’s research was recently published in the journal PlosONE. She said the findings show the urgency of thorough antibacterial cleaning in hospitals to control superbugs.

Best Ways to Protect Yourself from Germs

Whether you are sitting near a sick co-worker or you’re in the hospital, there are steps you can take to dodge sneeze germs.

The number one rule is to wash your hands—religiously. This stops you from spreading germs to your nose and mouth. That’s where bacteria and viruses enter your body. Keep alcohol-based (non-triclosan) sanitizer nearby. Use it after touching any surface other people have touched.

If you are in the hospital, make sure your healthcare providers wash their hands. One study found that doctors and nurses wash their hands only 22% of the time when they move between patients.

And be sure to take a probiotic supplement during hospital stays. It will beef up your “good bacteria” and help shield you from superbugs. But be warned: Most of them are missing two crucial ingredients… Get all the details HERE.