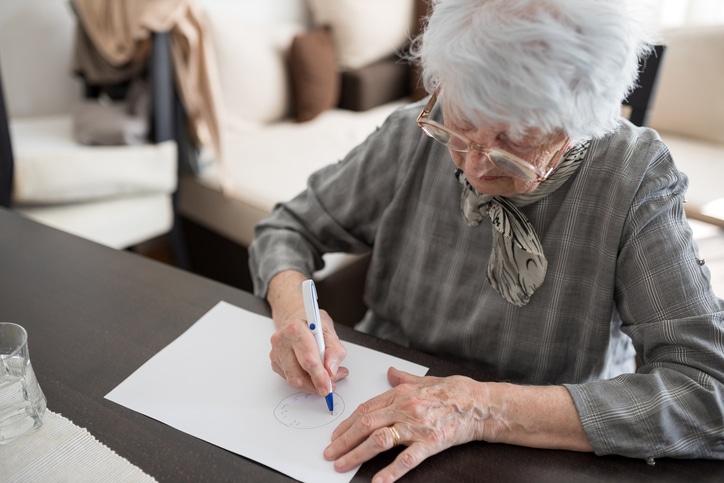 You lost your keys…

You couldn’t remember where you parked your car…

These are normal memory lapses. They become more frequent with age. Most of us have them from time to time.

But when seniors have an episode of absentmindedness, it’s hard not to wonder if it could be the start of dementia.

In the past, there was no way to find out, other than to undergo an exam by a neurologist. Even then, the diagnosis was usually not a sure thing.

Is It a Normal Memory Lapse? Or Is It Alzheimer’s?

Now, researchers at Ohio State University have developed a simple, at-home test that identifies the early, subtle signs of dementia. A study shows that it can uncover Alzheimer’s disease sooner than standard testing.

The test is called SAGE. It stands for Self-Administered Gerocognitive Examination. Researchers gave the test to 665 patients who had memory issues and followed them for eight years.[1]

It accurately identified patients with mild cognitive impairment who eventually progressed to dementia.[2]

The test takes only about 15 minutes. It’s completely free of charge.

Here’s the first page of a sample test:

“Any time you or a family member notices a change in your brain function or personality, you should take the test,” Dr. Scharre said. “If that person takes the test every six months and their score drops two or three points over a year and a half, that is a significant difference.

“Their doctor can use that information to get a jump on identifying the causes.”

How to Take the Test

It’s a written test that you take with a pen. Erasable pencils are not supposed to be used because changing your answers invalidates the results.

There are four different versions of SAGE so that people won’t get a boost from remembering what was on the exam the last time they took it.[3]

Since treatments for Alzheimer’s have limited effectiveness, some people may figure it’s pointless to take the test. But what they may not know is that the test can help diagnose other forms of dementia that are treatable.

Normal pressure hydrocephalus is one of the most common. An estimated 700,000 American seniors have it. It causes mental confusion and poor motor skills, similar to Alzheimer’s. But a relatively minor procedure to drain fluid from the brain usually ends the problem.[4]

You can print the SAGE test by going HERE. To score it, go to the physician’s section of the test website or take your test to your doctor.