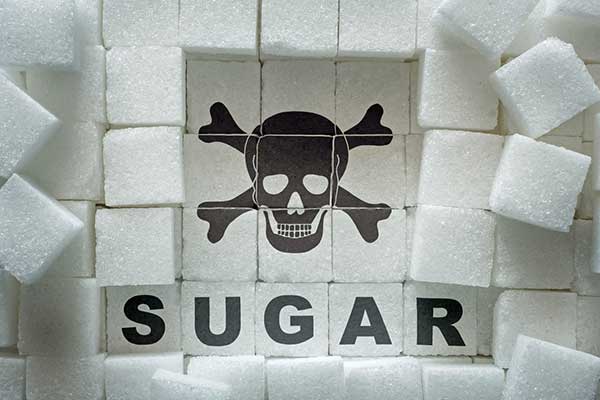 Sugar Is Poison… This May Be the Antidote.

It could be a godsend for people with diabetes. And it may help Americans end their addiction to sugar.

The average American consumes almost 17 teaspoons of sugar every day. That’s about 57 pounds a year.ii

The stuff is killing us. It causes inflammation, the hidden culprit at the root of most diseases. Beside diabetes, sugar is linked to obesity, high blood pressure, heart disease, stroke, cancer, Alzheimer’s, depression, tooth decay, and much more.

Researchers in India and at the Yeungnam University in Korea are involved in a series of ongoing studies of the herb gymnema sylvestre. The herb is derived from a woody vine native to the tropical areas of India and Africa.

The studies have found that gymnema (pronounced jim-NEE-mah) has a chemical structure similar to glucose. This allows the herb to block sweet receptors on the tongue. With the sweetness of sugar no longer detectable, cravings disappear.iii

Gymnema also signals the pancreas to make insulin. This is key to keeping blood sugar at a healthy, normal level.

In the trials, researchers put lab rats on a high-sugar diet for four weeks. Half the rats were also given powdered gymnema. The researchers performed baseline tests, including blood and glucose tolerance tests.iv

At the end of the study, blood and glucose were tested again. The animals given gymnema had:

The researchers concluded, “This study shows that gymnema extracts provide the possibility as a key role” in treating obesity.
In another laboratory experiment, rats given gymnema absorbed less glucose in their intestines. The sugar passed right through their bodies. And they increased their insulin production.v

Gymnema is proving to work in humans, too.

The scientists tested gymnema is humans, too. Subjects took 500 mg of gymnema daily for three months. They all improved their blood sugar levels, had less fatigue, and reduced hunger.

In a separate study at Massey University in New Zealand, scientists gave subjects a mint containing 4 mg of gymnema extract. A second group of subjects ate a placebo.vi

The gymnema group found that sugary foods lost their appeal. Favorite candies no longer tasted good. Their cravings for sweets of all kinds diminished, so they ate less of them.

Make It Easy to Say No to Desserts

First, she ate a fudge brownie. She said she enjoyed every “rich, sticky-sweet” morsel.

Then she took a 2 mg dose of gymnema. She waited for several minutes.

Then she tried another brownie.

“This time it tasted like putty—all gooeyness and no flavor,” she said. “The brownie was completely unappetizing.”vii

She added that “the effect lasted for about an hour.”

Can gymnema treat diabetes? That still has not been determined. Studies testing gymnema in diabetics are ongoing.

But it is clearly effective against sugar cravings. Researchers have found it is safe, with no side effects.

You can find gymnema supplements at health food stores and online. Look for organic versions that have no additives.

Follow the recommended dosage on the label. Do not take gymnema if you have problems with low blood sugar.

Editor’s Note: Have you gained weight during the pandemic? You’re not alone. Americans have packed on an average of two pounds a month during the coronavirus crisis, according to a recently study. Most will attempt to slim down by going on a diet.

Read our monthly journal Independent Healing to discover a better way to lose weight. You don’t have go hungry, give up your favorite foods…and it works better than dieting. Go HERE to find out more.

This Is Your Brain on Sugar

Do This in the Morning to Control Blood Sugar

A New Way Sugar Is Terrible for You