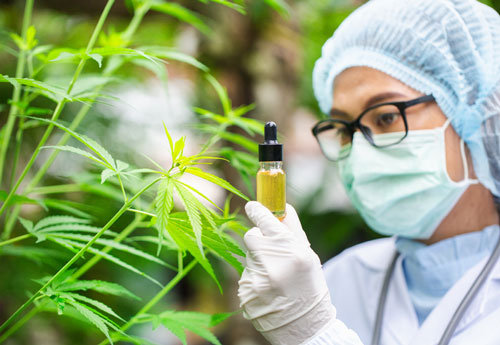 Pancreatic cancer is one of the most feared and deadliest forms of cancer.

Eighty percent of patients die in less than a year. Only 8% make it five years.

And the threat keeps growing… By the end of 2020, pancreatic cancer is projected to be second only to lung cancer as the leading cause of cancer death.

It tested a cannabis extract called FBL-O3G on mice.

Dr. Wilfred Ngwa was the study co-author. He said he and his colleagues were “very surprised” by the results. Not only did the treatment inhibit tumor growth, it “inhibited tumor progression in other parts of the body.”[ii]

The research team ran additional tests and confirmed this result.

The FBL-O3G treatment completely eliminated tumors in 70% of the mice.

Findings on the petri dish cell lines suggested that FBL-O3G was “more effective in killing pancreatic cells” than radiation therapy.

Dr. Ngwa and his team theorize that the cannabis extract can create “antigen cells that train the T cells (white blood cells), like a vaccine” to recognize cancer.

That’s hugely significant because pancreatic cancer isn’t usually discovered until it has spread. If successfully translated to medical use, this “will have a major impact in treatment of pancreatic cancer,” said Dr. Ngwa.[iii]

Researchers are planning more extensive testing of FBL-O3G and eventually human trials. We’ll keep you updated on the results.

Editor’s Note: What conditions can CBD and medical marijuana effectively treat? You won’t find straight answers in the mainstream media. And many doctors are woefully ignorant. Independent Healing’s Cannabis Cure Protocol tells you exactly how to use CBD or medical marijuana to feel better than you have in years. Subscribe HERE.