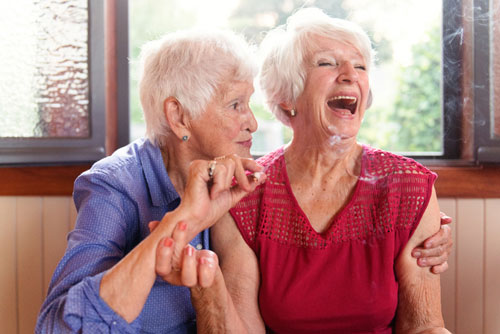 Marijuana has traditionally been associated with young people. For some generations, teenage pot smoking is a rite of passage.

These days, cannabis use among seniors is growing faster than among any other age group. One survey found a ten-fold increase in number of people over 65 who use marijuana products. Nearly 4% of older Americans say they have used cannabis in the past year.[1]

A new study attempted to find out why some many seniors are flocking to marijuana and CBD. The research was published in the journal Drugs & Aging.[2]

Scientists at the University of Colorado conducted focus groups with 136 people over 60 to learn more about their attitudes toward cannabis.[3]

Dr. Hillary Lum was a study co-author. “Some (seniors) use it to manage pain while others use it for depression or anxiety,” she said.[4]

Seniors: Doctors Won’t Talk to Us About Cannabis

A common theme was that seniors complained that it was difficult to talk to their doctor about using marijuana.

“I think (doctors) should be a lot more open to learning about it and discussing it with their patients,” one study participant said.

Dr. Lum said many doctors lack training and knowledge about the health effects of cannabis.

“From a physician’s standpoint, this study shows the need to talk to patients in a non-judgmental way about cannabis,” she said. “Doctors should also educate themselves about the risks and benefits of cannabis and be able to communicate that effectively to patients.”[5]

Editor’s Note: What conditions can CBD and medical marijuana effectively treat? You won’t find straight answers in the mainstream media. And many doctors are woefully ignorant. Independent Healing’s Cannabis Cure Protocol tells you exactly how to use CBD or medical marijuana to feel better than you have in years.

The Bodily System Doctors Don’t Know You Have