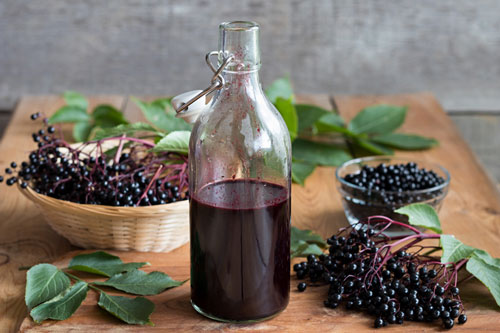 This flu season was shaping up to be short and mild. But then something happened that surprised scientists…

At a time when the flu season is normally long over, people are still getting sick. This has made it the longest flu season since the government started tracking flu 20 years ago.

Dr. Arnold Monto is a University of Michigan researcher who has studied the flu for 50 years. He says it is like nothing he’s ever seen before. It’s like having two flu seasons back to back.

“I don’t remember a season like this,” he said.[i]

Making matters worse is that protection from the flu vaccine may be wearing off in people who got the shot back in the fall.

So how can you protect yourself?

A new study shows that an ancient remedy may help prevent and treat the flu.

The research comes from Australia’s University of Sydney. Scientists used a juice serum derived from elderberries. They applied the serum to cells before they were infected with the flu. They continued applying the serum afterwards.

The researchers were surprised to find that elderberry extract fought the flu at every turn. It stopped the initial infection and inhibited growth of the virus at later stages.

Dr. Peter Valtchev was one of the study leaders. He said that the observation was important, because “blocking the viral cycle at several stages has a higher chance of inhibiting the viral infection.”[ii]

Influenza is a more serious health threat than many people realize. Recent research from the Centers for Disease Control found the flu death rate is much higher than previously thought…up to 646,000 people per year die from the disease worldwide. The flu killed more than 80,000 Americans last season. This season’s estimates are not in yet.[iii] [iv]

A number of other studies back up elderberry’s effectiveness.

Scientists at Israel’s Hebrew University-Hadassah Medical School Department of Virology divided flu patients into two groups. Some were given elderberry syrup. The others got a placebo.

More than 93% of the elderberry group got better in just two days. It took six days for the placebo group to start to recover.[v]

Elderberry syrup can help protect you from the “double whammy” flu season.

Most studies use the syrup (Sambucol) form of elderberry. It is commonly available online and in health food stores. Follow the directions on the label for dosage to prevent and treat the flu.

Editor’s Note: Find out how to activate your body’s natural secret weapon against the flu virus in our monthly journal, Independent Healing. You’ll find a wealth of useful, scientifically verified medical information on this and many other topics that you won’t find elsewhere. Go HERE to subscribe.