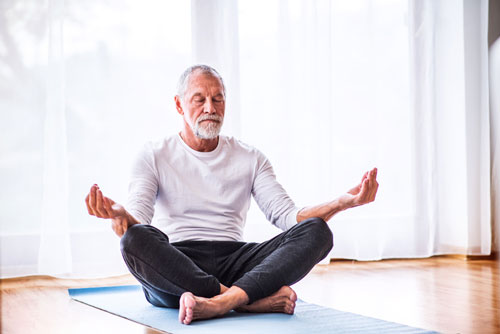 Everyone knows you can’t turn back the clock, right?

When it comes to your brain, researchers recently discovered that you can.

Dr. Sara Lazar is a neuroscientist. Years ago, she injured herself while training for the Boston Marathon. Her physical therapist suggested she stretch. That led her to take a yoga class.

She took yoga for the physical benefits, but soon noticed positive mental and emotional side effects. She felt calmer. She felt better equipped to handle stressful situations. She was more compassionate.[1]

Dr. Lazar eventually researched mindfulness meditation techniques, of which yoga is one type. She found evidence showed that they provided the benefits she had experienced and more.

But she wanted to do her own research.

In her initial study, the Dr. Lazar looked at people who had meditated for seven to nine years. She compared them to a control group of non-meditators.

The meditators had increased gray matter in several brain areas. These included the insula. It’s involved in emotion, pain, and enjoyment of music.[2]

The frontal cortex deals with important functions like memory, attention, communication, and consciousness.

Dr. Lazar and her team wanted to establish whether people with “younger” brains were attracted to meditation…or if meditation made brains younger. In other words, they wanted to know if there was a true cause and effect between meditation and brain youthfulness.

So they ran another experiment.

The second study looked at people who had no previous meditation experience. After eight weeks of meditation, the researchers observed thickening in the subjects’ brains.

But one part of their brains shrank: the amygdala. This region is linked with fear and anxiety.

Make your brain younger by practicing mindfulness meditation. It’s simple: You sit comfortably in any quiet place, focus on your breathing, and when your attention wanders, return.

Find a seat. Sit on a chair, a park bench, a carpeted floor—anywhere that is comfortable. You want a stable, solid seat…not a porch swing or rocking chair.

Position your legs. Many people like to cross their legs, but that’s not necessary. Sit so that you can relax.

Sit up. Straighten your upper body, but don’t be stiff. Your back has a natural curve. Let it be there.

Drop your hands. Let your hands rest naturally on your legs.

Look ahead. You can close your eyes or gaze forward without focusing on anything in particular.

Feel your breath. Pay attention to the physical act of breathing. Notice your chest and belly rise and fall. Mentally note breathing in and breathing out.

When your mind wanders… Don’t worry about it. That’s normal. Just go back to paying attention to your breathing.

Stop. Open your eyes if they were closed. Notice how your body feels. Pause for a moment to consider how you’d like to continue on with your day.

How long you meditate is up to you. Subjects in the study above meditated about a half hour daily on average. Dr. Lazar says her own meditation practice is highly variable. “Some days 40 minutes. Some days five minutes. Some days, not at all.”

She compares it to exercise. “If all you can do is just a little bit every day, that’s a good thing, too.”

Need a Quick Burst of Brain Power? Do This
The Yogi Masters Were Right… Meditation Sharpens the Mind
They Took Almost 10 Years Off Their Brain Age by Doing This