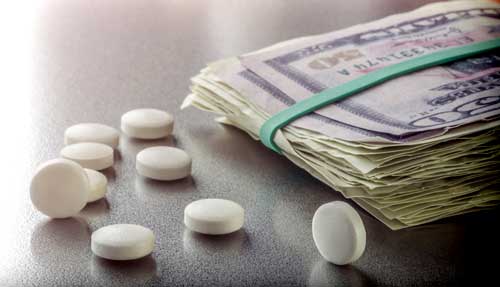 When it comes to Big Pharma’s misdeeds, the opioid epidemic gets most of the headlines. And for good reason. More than 400,000 Americans have died from opioid overdoses in the past 18 years.[1]

Not surprisingly, sales of opioid painkillers have plummeted and some have been pulled from the market.

But a new study shows that Big Pharma has found another way to profit from drug addiction.

Researchers have found that the number of people taking anti-anxiety pills (benzodiazepines) has more than doubled in just the past five years.

Most people aren’t aware of the dangers of benzodiazepines. They are highly addictive, both physically and psychologically.

About one-third of people who take benzos for six months or longer will have serious withdrawal symptoms such as seizures when they try to quit.[2]

Dr. Donovan Maust of the University of Michigan’s Department of Psychiatry was the lead researcher. He and his colleagues analyzed data from the National Survey on Drug Use and Health. It’s an annual nationwide survey funded by the U.S. Substance Abuse and Mental Health Services Administration.

The goals of the study were to determine the prevalence of benzodiazepine use.[3]

The information they uncovered was eye-opening…

Use of benzodiazepines is more than twice as high as it was thought to have been. Close to 13% of American adults used benzos last year.[4]

A total of 25.3 million adults used benzos as prescribed last year. Another 5.3 million admitted to misusing the drugs. “Misuse” is defined as taking drugs in a way that is not directed by a doctor…taking a higher dose, or taking them more often or without a prescription.

Doctors say seniors are at higher risk when taking benzos. Since the drugs have a sedative effect, they can lead to falls and fractures.

This may be the worst part…

Even though they are killing thousands of Americans every year, benzos don’t even work for the conditions for which they are prescribed. Dr. Maust said the drugs are nearly useless for fighting anxiety, insomnia, or panic disorders.

“The current amount of use way, way exceeds what the evidence would support.” he said.

The downside of taking benzos far outweighs any possible benefits. There are natural approaches to relieving anxiety that are more effective and risk-free:

Editor’s Note: Big pharma wants you to believe that drugs are the answer to everything. If you’re interested in the effects of other commonly prescribed drugs, we list several others in our special report, The Top 10 Dangerous Pharmaceutical Drugs—And Their Natural Alternatives. It’s an important read for you and your family.