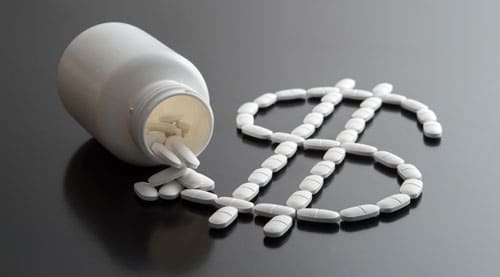 We have often told you about atrocious behavior by pharmaceutical companies. They have proven over and over again that they care more about their profits than their customers’ health.

But we just discovered something that shocked even us.

It has to do with a cancer drug.

Imbruvica (ibrutinib) is a medication used to treat chronic lymphocytic leukemia (CLL). This cancer is fairly rare. And it’s often deadly. Average survival time for advanced CLL is only about two years.1

Imbruvica was priced at $148,000 a year. But it can mean the difference between life and death. Therefore, many CLL patients took it even though it might lead their families into financial ruin.

But they recently got good news…

Researchers at a nonprofit group called the Value in Cancer Care Consortium examined dosage levels of Imbruvica. They had anecdotal evidence from oncologists that the drug was effective at one-third the recommended dosage. Patients could take just one 140-mg pill a day instead of three.

This would slash the cost by nearly $100,000 a year. The group began planning a clinical trial to test the lower dose.

Imbruvica is manufactured in a partnership by two pharmaceutical companies, Janssen and Pharmacyclics. Before the trial could start, the firms announced a complicated new pricing structure.

They effectively tripled the price of the drug so they wouldn’t lose revenue from cancer patients taking fewer pills. The consumer group called it a heartless scheme to make money off the backs of desperate cancer patients.

Dr. Mark J. Ratain is an oncologist at the University of Chicago Medicine. He’s also a member of the Value in Cancer Care Consortium. He and other cancer doctors were furious when they heard about the price gouging. “That got us kind of p—ed off,” he said.

“We were just in the early stages of planning [a clinical trial] and getting it organized, and thinking about sample size and funding, and we caught wind of what the company was doing.”2

Dr. Stacie Dusetzina is an associate professor of cancer research at Vanderbilt University Medical Center in Nashville. She called the pricing scheme “disturbing.”

“It appears to be a program being implemented, possibly to save some of the profits they’d be losing if dose reductions are really rapidly going to start coming down the pike,” she said.”

In a joint statement, the drug manufacturers pointed to the fact that they were offering Imbruvica in lower-dose pills. Of course, they didn’t mention that they had tripled the cost. They called their pricing policy “a new innovation” to help patients with “improved packaging.”

The Value in Cancer Care Consortium is fighting back. They have urged the FDA to review “the high price per pill.” The FDA has not yet responded.3

Pill splitting is not an option with Imbruvica. It has a coating on the capsules that affects how the drug works.

But Value in Cancer Care says there is another option. They recommend that oncologists consider having their patients take the medication every other day instead of every day. This often seems to work just as well…at half the cost.

The Imbruvica profiteering shows that Big Pharma will stop at nothing to make a buck…even if it means wringing every last cent out of dying cancer patients.

Editor’s note: This doctor’s natural cancer treatment cured 85% of his patients. Then authorities found him dead in a river. Those responsible for his death will stop at NOTHING to keep this cancer-killing treatment buried. But you can access it today…if you know how.