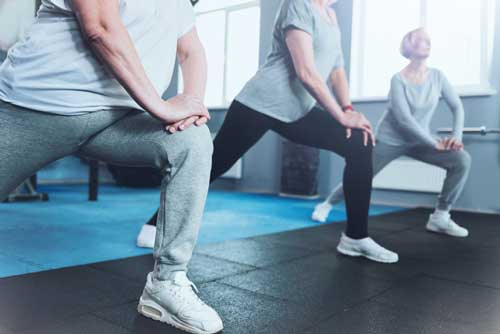 Maybe you need a few days just to relax. So you take time off from your normal exercise routine.

Or perhaps you’re on vacation, and you do little besides eat, drink, and lounge around the pool.

You’re going to get back to working out eventually anyway, so there’s no harm in a little break, right?

Two new studies show that if your exercise hiatus extends to two weeks, it can have damaging and lasting effects on your body.1

One study was conducted by institutions including the University of Liverpool in England.2 They followed 45 adult men and women. The subjects were active and healthy. They walked more than 10,000 steps on most days.

For two weeks, researchers had the participants become more sedentary. They then went back to being active again.

Throughout the study, the researchers took detailed measurements of the subjects’ health markers.

As you would expect, after two weeks of little activity, the participants’ fitness suffered. They had higher blood sugar levels. Their cholesterol profile was worse. Their insulin sensitivity declined. And they gained abdominal fat.

But even after two weeks of getting back to being active again, some fitness levels of some of the subjects didn’t go back to normal. They retained some insulin resistance. And they couldn’t exercise as hard as they did before the break.

Another study was even more troubling… It focused on overweight subjects over 65.3 They had high blood sugar and were at risk of becoming diabetic. But they were considered healthy in other respects. They were also active and walked 7,000 to 8,000 steps daily.

For the study, the volunteers cut their activity to less than 1,000 steps a day. They sat more often and were generally much less active. After two weeks, they returned to their previous, more active routine.

During the inactive phase, the subjects’ blood sugar levels climbed. Insulin resistance got worse. Some came close to becoming full-blown diabetic and had to be taken out of the study.

Of the volunteers who made it to the end, most did not recover from their negative metabolic changes even after returning to full activity for two weeks.

Dr. Chris McGlory is a research fellow in kinesiology at McMaster University in Canada. He led the study. He believes the results show that just a few weeks of inactivity can have long-lasting health damage. The consequences seem to be worse the older you are.

“It’s not uncommon for older people to become sick or injured,” he said. They can wind up “hospitalized or housebound for several weeks…” Dr. McGlory suggests people in that predicament consult a physical therapist about exercise options.

“If it’s at all possible, don’t stop moving,” he cautions.

All It Takes Is 10 Minutes a Day

The obvious take-home message from the studies is that you shouldn’t take a prolonged break from exercise.4

Dr. Michael Joyner is an exercise researcher at the Mayo Clinic. He says that even doing a quick 10-minute workout can keep you from getting out of shape.

Warm up for three to five minutes doing your chosen form of exercise.

Then do the exercise at the highest intensity level you can for the next minute.

Slow down for the next minute or two to catch your breath. Then go hard again for another minute.

Repeat this process five to seven times. Afterward, do the activity slowly for at least two minutes to cool down.

The idea is to push your body for a brief burst, and then allow it to recover. HIIT allows you stay in great shape even when you don’t have time for a long workout.

One Type of Exercise Stops Migraines

The Best Time to Exercise to Lose Weight