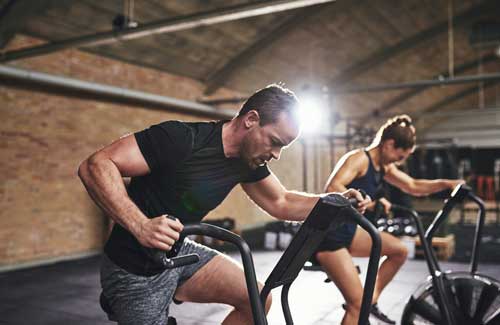 It’s a basic premise of fitness…

When your heart pumps faster during exercise you get into better shape.

Of course, to get your heart rate up, you have to work harder. But some athletes believe they have figured out a simple hack to get around this.

It gets their heart pumping faster without having to exercise harder or longer.

How do they do it?

They reduce their fluid intake before and during their workouts.

That means they don’t sweat as much. Without sweat, their heart has to work harder to keep their body cool. It pumps faster and they believe they get into better shape.

The idea might sound farfetched, even dangerous. But it has some scientific backing.

A 2014 study published in the American Journal of Human Biology had nine athletes limit their fluid intake during the five days of training. The study concluded that dehydration induced “effective” improvements in fitness.1

But researchers in England recently decided to do a more thorough test of this training shortcut.

In the first, the men rode stationary bicycles in a laboratory for 11 consecutive days. The researchers kept the temperature of the lab around 100 degrees. The riders did 60 to 90 minutes of intense riding each day.

They also hydrated well. Each man drank almost a half-gallon of fluids during the rides.

The researchers drew blood at the start of the study and before and after each ride.

Three months later, the researchers repeated the same experiment. Except this time, the athletes drank no fluids.

The researchers again took blood samples. And they compared the readings to those taken after the hydrated exercise sessions.

They found that most measurements were almost identical for both training regimens. But they found a disturbing difference in one marker.

The level of cortisol when the men did not hydrate was far higher.

Cortisol is a hormone. Your body releases it during stress.

Dr. Joseph Costello is an exercise physiologist at the University of Portsmouth in England. He was the lead author of the study.

He said that not hydrating causes “more physical stress but no particular physical benefit.”

He added: “I would suggest that everyone try to stay hydrated when performing (exercise) in the heat. Consume fluids throughout the activity.”

The study recently was published in the international journal Cytokine.

The Best Way to Hydrate

Even if you are only a casual athlete, hydration is important. Before a workout, take a long drink of water even if you aren’t thirsty. Then continue to hydrate during exercise.

If you are doing an intense activity or working out in the heat, drink 10 to 20 ounces for every 20 minutes of exercise.4

Avoid sports drinks. They tend to be loaded with sugars.

A great alternative to plain water is coconut water. It has beneficial electrolytes.

Drink it straight or mix a couple ounces with water. Just make sure you are getting pure coconut water with no added sugar or artificial ingredients.