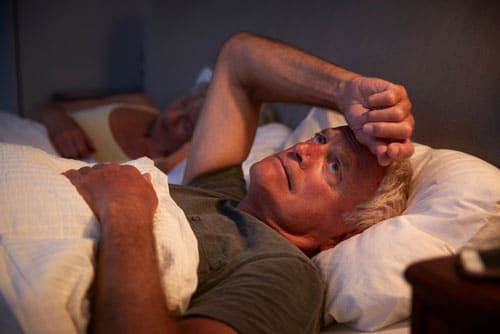 Editor’s Note: This week in Health Watch, we’re tackling one of the most common—and frustrating—issues men face as they get older… Getting up to pee multiple times a night. We’ll reveal why it happens and what you can do about it… And how to finally get a good night’s sleep.

Most men get up once or so a night to use the bathroom. It’s normal.

It disrupts your nights and messes with your days. This can do more than just make you tired the next day… It can affect your memory and reflexes, make you feel depressed, and even increase your risk of heart disease and gastrointestinal disorders.1

The problem is that few doctors associate these problems with nocturia. Plus, most guys don’t talk to their doctors about nighttime bathroom trips until they begin to affect their quality of life during the day.2

Yet in one survey, 72% of older people said they suffered from interrupted sleep because of nocturia. If you’re over 65, you’re more likely to experience it.3

Nocturia is just one part of an even bigger problem… It’s called LUTS: Lower Urinary Tract Symptoms. It’s an umbrella term for all those annoying feelings, like the frequent urge to go…feeling like you didn’t empty your bladder…and hesitating or having a weak stream once you get to the toilet.

There are a few different things that cause LUTS. Some of them are serious. They include being diabetic, taking a diuretic for hypertension, being obese, or having sleep apnea or heart disease.

Then there are a few other causes that aren’t as serious, but are more common.

First, it may simply be that your body produces more urine at night than your bladder is able to hold. That’s called low nocturnal bladder capacity.

The second cause is the one you and your doctor probably assume from the start… Your prostate. It’s a good guess. Almost every man’s prostate grows as he gets older. This can crowd your bladder.

But the third reason is one that may surprise you. You may not have realized it could even happen to men. And that’s what makes it such an overlooked cause of men’s pee problems.

In the next issue of Health Watch, we’ll reveal exactly what it is… And more important, what you can do about it.