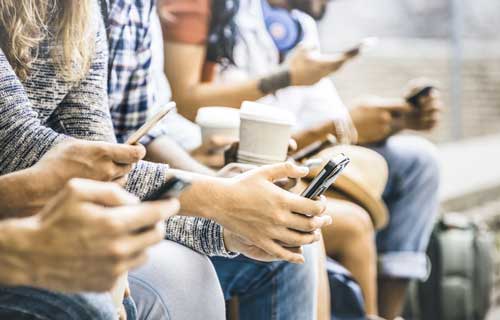 We now spend an average of two hours every day sharing, liking, tweeting, and updating on social media sites.1

And studies show that spending time on Facebook, Snapchat, Twitter, and Instagram can damage our mental health. Social media use is linked to depression, anxiety, insomnia, stress, and general unhappiness.

Researchers had assumed that these effects were greatest in young people, since they typically spend more time online than older people do.

That’s why new findings from Temple University are surprising… and alarming.

The study included 750 people age 18 and older. The subjects filled out detailed questionnaires about their social media use. And they took tests to determine their levels of stress, happiness, depression, and other emotional issues.

Scientists found that avid social media users had higher levels of mental health issues. That was no surprise, since previous research has shown the same thing.

But what was surprising is that the impact was greater for middle age and older adults. The study found that people 30 and older were 22% more likely to have mental health problems if they used social media regularly. Younger subjects were unaffected.2

‘My Facebook Friends Are Doing So Much Better Than I Am’

Dr. Bruce Hardy is an assistant professor in the Department of Strategic Communication at Temple University. He was the lead author of the study.

He explained that older study participants are more likely to use social media to compare their success with that of their peers. And when they fall short, they feel stressed and depressed.

“In their desire to validate accomplishments, many middle-aged adults may look to high school peers as a point of comparison,” Dr. Hardy said.

And their peers “present themselves hyper-positively online,” he said. They typically mention their accomplishments, possessions, vacations, children’s success, and other positive aspects of their lives on social media. But they omit the bad stuff.

This means “social comparisons are unrealistic and may deteriorate self-worth and mental well-being,” Dr. Hardy said.

The same model doesn’t hold true for people under 30, he said. That’s because they have grown up with social media and better understand that it’s not an accurate portrayal of real life.

The study recently was published in the journal Computers in Human Behavior.3

There is a way to prevent being drawn into Facebook depression as you age.

A large study by researchers at the University of California, San Diego, found that one group of Facebook users enjoyed better mental and physical health and longevity than others.

Instead of posts that featured their accomplishments, possessions, opinions, politics, etc., they posted photos of themselves with others in real-life situations. In other words, people whose social media use reflects a healthy social life are more likely to be happy.

So when you use social media, make your posts more… social.

Don’t focus only on yourself. Share photos and information about activities with family, friends, and co-workers.

One more thing… Facebook, Twitter, and other sites can be great for keeping in touch with friends. But don’t let social media become a substitute for real-life interactions.

If you find yourself feeling empty and depressed after spending time online:4

Facebook, Twitter, and other sites can be great for keeping in touch with people you know. But they are not a healthy replacement for real-life friendships.