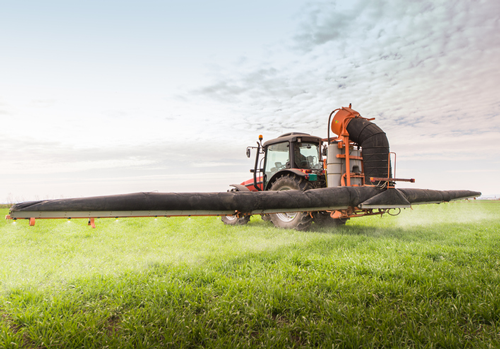 In 2014, DeWayne Johnson was healthy and enjoying his job as a school groundskeeper in Benicia, California.1

But then the father of three noticed lesions creeping over his skin. Soon 80% of his body was covered.

His doctor diagnosed him with non-Hodgkin’s lymphoma. Now, at age 46, his physicians say he has just months to live.

But Johnson has one thing he wants to do before he dies: Take down the chemical company Monsanto.

He and his doctors blame his cancer on Johnson’s long-term use of Monsanto’s weed killer, Roundup. He is suing Monsanto, alleging they hid the cancer-causing dangers of their product for decades.

Non-Hodgkin’s lymphoma is a cancer of the white blood cells. It usually doesn’t strike people until they are over 65.2

Johnson’s job required him to mix and spray hundreds of gallons of Monsanto’s herbicides onto school properties. He underwent chemotherapy. But it has not stopped his cancer from spreading.3

Late last year, he was told he was going to die. That’s when he decided to press forward with his lawsuit.

The company has quashed dozens of similar legal claims for years. It has deep pockets to hire an army of lawyers.

But this case may be different.

Johnson is the first person the courts have allowed to introduce evidence that Monsanto knew that glyphosate, the active ingredient in Roundup, caused cancer.

Michael Miller, Johnson’s attorney, charged “Monsanto does not want the truth about Roundup and cancer to become public.”

A trial judge agreed. The judge ruled that Johnson’s evidence could prove “that Monsanto has long been aware of the risk that its glyphosate-based herbicides are carcinogenic.”

The judge added that a jury might find “material fact” that the company “continuously sought to influence the scientific literature to prevent its internal concerns from reaching the public sphere.”4

EPA Increases the Amount of Roundup in Food

For years, Monsanto has insisted that Roundup is safe. But for over a decade studies in Canada and Europe have linked Roundup to cancer in humans.5

Despite this, the Environmental Protection Agency (EPA) has done nothing to protect the public.

In fact, from 2000 to 2015, the EPA actually increased the amount of Roundup allowed in food. One study found that 93% of Americans now have glyphosate in their urine.6

But don’t expect Monsanto to admit that Roundup is dangerous. It is the company’s best-selling herbicide and has made them billions of dollars.

The US Department of Agriculture reports that Roundup is used on 89% of corn and 93% of soybeans.

Minimize Your Exposure to Weed Killer

More than 300 million pounds of glyphosate are dumped on American plants every year. But there are ways to minimize your exposure:

Editor’s note: This doctor’s natural cancer treatment cured 85% of his patients. Then authorities found him dead in a river. Those responsible for his death will stop at NOTHING to keep this cancer-killing treatment buried. But you can access it today…if you know how.