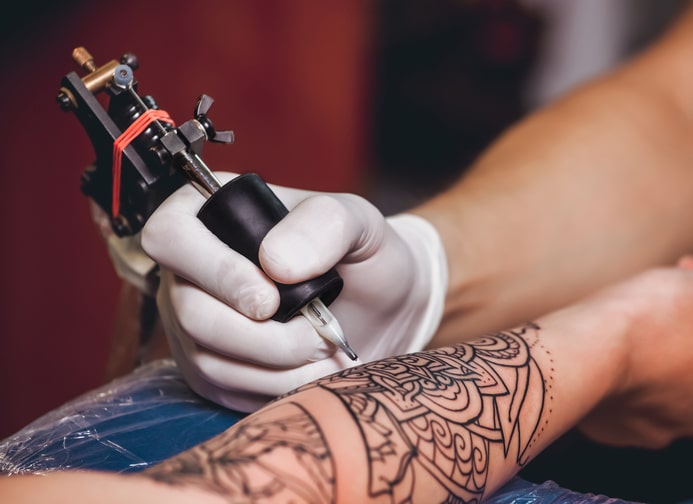 Tattoos have hit an all-time high in popularity. The number of Americans with at least one tattoo has jumped 50% over the past four years. Pro and college athletes often cover large swaths of their body with ink.

Now, a new study shows that tattoos may affect your workout.

Researchers at Alma College in Michigan recruited 10 healthy young men with tattoos on one side of their upper body and an equal amount of untattooed skin on the other side.

The researchers applied special sensor patches to both the tattoo and untattooed skin. The patches were designed to absorb perspiration.

After the subjects worked up a sweat for 20 minutes, the researchers analyzed the patches.

Dr. Maurie Luetkemeier is a professor of physiology at Alma College. He said the findings show that tattoos may have a profound effect on the body’s ability to cool itself and balance electrolytes during exercise.

Why Tattoos Make You Sweat Less

The researchers said tattoos decrease sweating because the ink blocks some of the sweat glands.

Dr. Luetkemeier said that your body normally reabsorbs some of the sodium that comes out in perspiration. But the study showed that tattoos partially block this reabsorption. So heavily tattooed people lose more sodium and other electrolytes.2

The researchers found that the age of the tattoo had no effect on sweat or sodium levels.

Small tattoos don’t interfere with the body’s cooling mechanism, Dr. Luetkemeier said. That’s because they don’t cover enough skin to make much of a difference.

But if you have extensive coverage—especially on your back, chest, or other areas dense in sweat glands—tattoos could hurt your ability to cool your body…and hold onto important nutrients and electrolytes during strenuous workouts. This is especially true when exercising in heat.

“You look at someone in the military, where tattoos are very prevalent, and if they’re exposed to high heat and a heavy workload, there could be thermoregulatory problems,” Dr. Luetkemeier said.

The study was published recently in the journal Medicine and Science in Sports and Exercise.3

Before working out, and especially if you have large tattoos, it’s important to hydrate well before exercising. Skip the sugar-laden sports drinks and go with plain water.

Or even better, drink coconut water before a workout. It has five key electrolytes…sodium, potassium, calcium, magnesium, and phosphorous.

Look for organic varieties. Unlike sports drinks, they have no artificial ingredients or harmful additives.