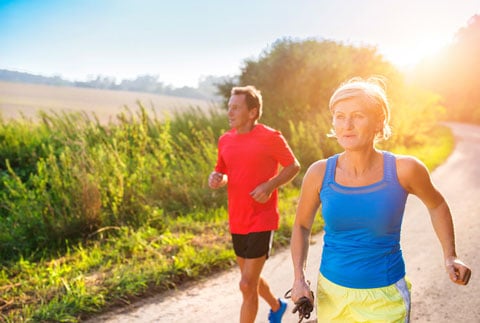 Eating right… Not smoking… Doing puzzles… Most of us know these things can help keep us mentally sharp into old age.

But new research shows that when it comes to keeping a strong brain, one lifestyle change is more important than all others.

Researchers at Murdoch University in Perth, Australia, evaluated the relationship between exercise and excessive brain plaque. This build-up, which scientists call “brain amyloid load,” is a well-established biomarker for Alzheimer’s disease.1

They gathered data from 139 people who were genetically predisposed to get Alzheimer’s. Their average age was the mid-30s. None of them had started to show symptoms of the disease.

The researchers asked the patients to keep track of how much they exercised. They categorized them into two groups: those who worked out for 150 minutes or more per week, and those who exercised less.

They then performed brain scans on all the participants to determine their brain amyloid load.

Researchers found that the levels of brain amyloid was much higher in the low-exercise group.2

In other words, 150 minutes or more of exercise per week seemed to slow the process that leads to Alzheimer’s.

Dr. Belinda M. Brown is a research fellow in the School of Psychology and Exercise Science at Murdoch University. She led the study.

“The results suggest that higher levels of exercise may delay the accumulation of Alzheimer’s pathology and subsequent symptom onset,” she said.

Exercise: Best Medicine for Your Brain

Two other new studies confirm the brain-healing power of exercise:

After three months, brain scans showed the subjects had stronger connectivity among different brain regions. And they scored higher on memory tests.4

Neuroscientist Dr. Steven Braithwaite reviewed the new studies. He said they show that if you want to prevent dementia, “exercise has been proven to have the biggest impact.” 5

Editor’s Note: If you’re worried about staying mentally sharp as you get older, there’s something else you should know… The decades’ worth of study results on this natural herb extract are so promising that Big Pharma is trying to turn it into a drug. Get all the details HERE.