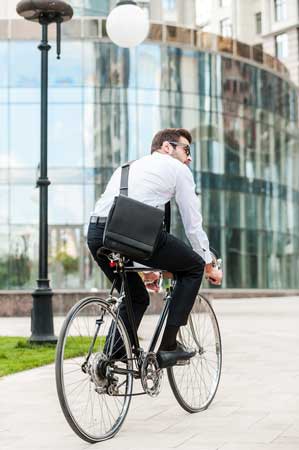 You can dramatically cut your risk of cancer and heart disease on the way to work.

That’s the message of a major new study out of the UK. Researchers at the University of Glasgow followed 150,000 workers for five years. The scientists found that one commuting habit was literally the difference between life and death.

During the study, 3,748 subjects were diagnosed with cancer and 1,110 developed heart disease. There were 2,430 deaths among the participants.

And bikers didn’t need to commute a long distance to benefit. Their one-way trip to and from work averaged about 2 ½ miles.

People who walked to work also benefited, although not as much as bikers. They lowered their risk of heart disease by 27%. Walking did not affect cancer risk or overall mortality. (That’s likely because the walkers in the study lived an average of just over a half mile from work.)

Dr. Jason Gill is a researcher at the Institute of Cardiovascular and Medical Sciences at the University of Glasgow. He is a study author. “This is really clear evidence that people who commute in an active way, particularly by cycling, were at lower risk,” he said.

Using your commute to exercise is a good way to make sure you stay active, he said. “You need to get to work every day, so if you built cycling into the day it essentially takes willpower out of the equation.”

The study was published recently in the prestigious British Medical Journal.2

The Best Kind of Exercise

The best kind of exercise is the kind you will actually do. A gym membership or a yoga class does you no good if you don’t participate consistently.

If you build exercise into your normal daily activities, you don’t have to set aside extra time—or even make much of an effort—to get big health benefits.

In another study, researchers at the University of Colorado Anschutz Medical Campus followed 30 sedentary office workers. They found that taking six five-minute walks during the workday actually gives you greater benefits than one long walk. The workers reported the short walks made them feel happier and more energized… And they had fewer food cravings.

The possibilities to build activity into your day are endless… Here are a few simple things to try:

The more physical activity you can integrate into your daily routine, the healthier you’ll be. And if you’re worried about cancer, there’s something else you should see…

We’ve uncovered one of the most shocking conspiracies of all time… A scheme to suppress a stunningly effective treatment for cancer…and keep it hidden from the patients who desperately need it. Get all the details HERE.