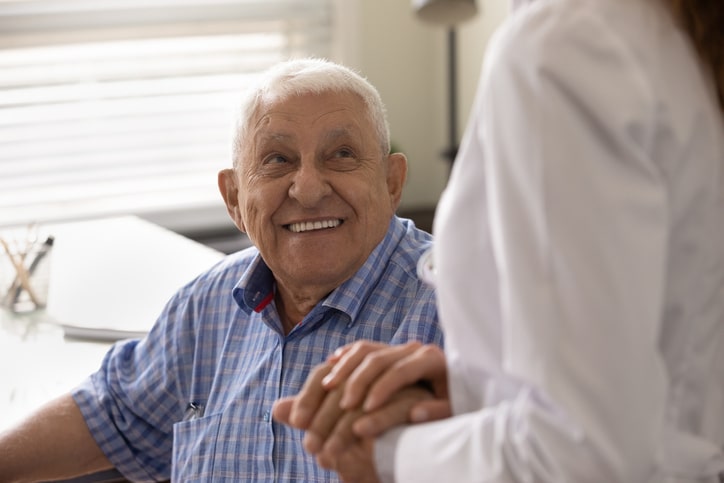 Mainstream medicine is baffled by Alzheimer’s.

They don’t know what causes it.

They don’t know how to prevent it.

And they have no idea how to treat it.

Yes, the FDA recently approved a drug for Alzheimer’s patients. It’s called aducanumab. But it’s so ineffective, expensive, and risky that many doctors refuse to prescribe it.[1]

Now, there may finally be hope for people with Alzheimer’s. Two scientists say they may have unlocked the key to reversing the brain-wasting illness.

It has to do with oxygen. And they say it has already worked in 11 patients.[2]

Her Memory and Concentration Came Back

Scientists looked at the case of a 58-year-old woman. Over five years she had experienced cognitive decline. Brain scans confirmed she had Alzheimer’s.

Doctors treated her with hyperbaric oxygen therapy (HBOT). The woman was given 40 treatments over 66 days.

A third of the way through the regimen, she reported higher energy levels and being more active. Her mood improved. She was better at crossword puzzles and daily tasks.

After 40 treatments, her memory and concentration came back.  Her sleep quality, appetite, and ability to use a computer improved. She had decreased anxiety and disorientation. Physical factors such as tremors, deep knee bends, and motor speed improved.

PET brain scans confirmed that her brain had healed. Her brain metabolism readings were more like a normal person’s than someone with Alzheimer’s.

Dr. Paul Harch was one of the study leaders. “We demonstrated the largest improvement in brain metabolism of any therapy for Alzheimer’s disease,” he said.

He explained that the HBOT treatment may be the first “not only to halt, but temporarily reverse disease progression in Alzheimer’s disease.”[3]

Dr. Edward Fogarty also worked on the study. Oxygen therapy, he said, “has promise where no other real hope for recovery of dementia has ever existed before.”

Researchers in China and Israel also report that HBOT is working in patients in both countries. In a study published in the journal Alzheimer’s & Dementia, Chinese scientists tested oxygen therapy on 42 Alzheimer’s patients.[4]

They underwent 40 minutes of HBOT once a day for 20 days. Afterward, the subjects’ cognitive test scores significantly improved.

Professor Uri Asher tested HBOT on elderly people with memory loss in a study conducted at Tel Aviv University in Israel. Subjects showed “an improvement of blood flow to the brain, as well as real improvement in cognitive performance,” he said.[5]

Is This the Cure for Alzheimer’s?

During HBOT, you are placed in a special room or chamber. You breathe pure oxygen while exposed to higher pressure. This enables your lungs to absorb more oxygen.

HBOT is a widely used treatment for conditions other than Alzheimer’s. It benefits people with infections, wounds, burns, anemia and embolisms. It’s also used to treat scuba divers suffering from decompression sickness.[7]

If you think that someone you know might benefit from HBOT, have their doctor refer them to an oxygen therapy clinic.

For a nationwide directory of HBOT centers, go here.