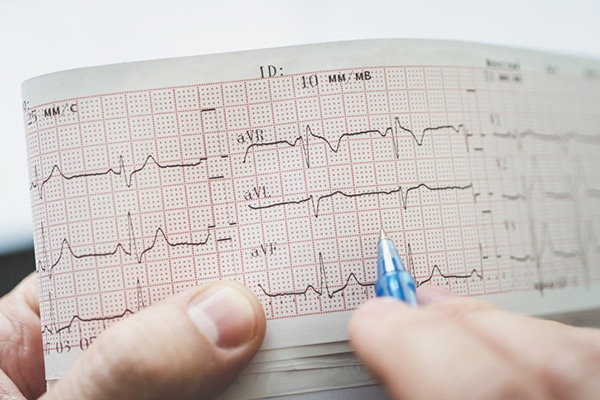 There is a simple heart test that doctors often give as part of routine physicals.

But this screening actually does more harm than good in most patients. And you should avoid it unless you have symptoms.

It’s called an electrocardiogram (ECG or EKG for short).

The doctor or a nurse puts electrodes on your arms, chest, and legs to record your heart’s electrical activity. The results are recorded on a chart. You’ve probably seen ECG readouts with the familiar horizontal line that moves up and down with each heartbeat.

An ECG can check your heart rhythm and blood flow. It can also reveal if you’ve had a heart attack.i

Just Say No to Routine ECGs

Since it’s noninvasive and doesn’t take much time, it’s easy to go along with your doctor when he wants you to take an ECG. But unless you have an existing heart condition or are suffering heart symptoms, you should just say no.

Because even though an ECG itself causes no harm, the results often lead doctors to needlessly perform a barrage of other procedures that do cause harm.

That’s the finding of the U.S. Preventive Services Task Force. It’s an independent group of medical experts. The Task Force now recommends against ECGs for low-risk patients because they lead to unnecessary testing and treatment.ii

Findings from the group were published in the Journal of the American Medical Association (JAMA).

Dr. Seth Landefeld is a member of the committee that developed the new recommendations. Dr. Landefeld said that if you are at low risk for cardiovascular disease, “there is no evidence of benefits that would outweigh the possible harms.”

As an example, Dr. Landefeld points out that when ECGs show a possible abnormality, doctors often follow up with an angiogram.

It is not without risk. It involves having a catheter inserted into your groin or arm. The catheter is threaded up to the coronary arteries. Radioactive iodine dye is then injected into the arteries through the catheter and X-rays are taken.

The angiogram usually doesn’t find any problems. But it carries a small risk of heart damage. X-rays expose you to radiation that is linked to cancer. And radioactive iodine is linked to thyroid damage.iii

The anti-ECG advice isn’t coming out of the blue. Many experts have said for years that routine ECGs are harmful. But doctors have ignored them. They continue to administer 40 million routine ECGs a year.iv

Dr. Robert Hendel is chief of cardiology at Tulane University. He asks the obvious question: “If there’s really no benefit and it may open a can of worms, then why are we doing (ECGs)?”v

It may come down to money.

ECGs used to be performed primarily by cardiologists. You had to make a separate appointment to get the test.

But today, general practitioners often have their own ECG equipment. The more tests they run in their own office, the more they get paid…whether a patient needs them or not.vi

Dr. Robert Myerburg is a professor at the University of Miami Miller School of Medicine. He wrote an editorial that accompanied the Task Force recommendations. He said some doctors may give ECGs because patients ask for them.

Don’t be one of them. Unless you have symptoms or heart risk factors, avoid ECGs. They can put on a slippery slope to risky, unnecessary tests and treatments.