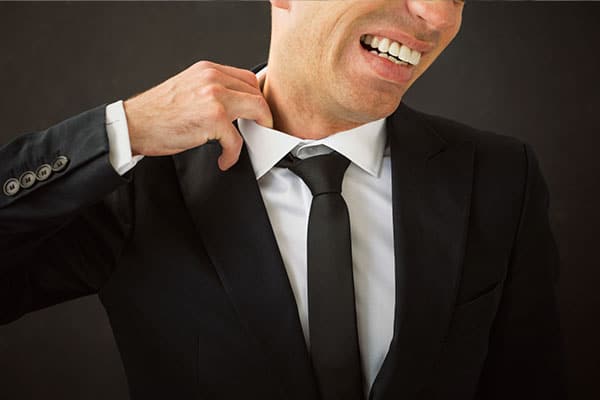 Clothes may make the man…but wearing a necktie can hurt your brain.

That’s the surprising conclusion a high-quality study performed in Germany. It found that wearing a tie reduces blood flow to the brain. This, in turn, may raise the risk of a stroke and lowers cognitive function.

For the study, researchers at University Hospital Schleswig-Holstein recruited 30 healthy men. They had half the men wear a traditional necktie. The other half wore an open collar and no tie. i

Then the subjects had magnetic resonance imaging (MRI) scans of their brains to check for cerebral blood flow (CBF). ii

CBF is the amount of blood moving through your brain at any given moment. Blood brings oxygen and nutrients to the brain. It also removes waste materials.

High CBF is associated with higher brain functioning. On the other hand, restricted CBF can make you less mentally sharp. It can also cause an ischemic stroke. iii

The subjects who didn’t wear a tie underwent one brain scan. The tie-wearing subjects had three scans.

In the first scan, the men wore their tie loosely around their necks with their top shirt button undone.

In the second scan, they wore their tie in formal fashion, with their collar buttoned and tie snug.

In the third scan, they loosened their collar and tie again.

The MRI scans found that when the neckties were tightened, cerebral blood flow decreased by an average of 7.5% compared to the no-tie group. Five men had a decrease of more than a 10%.

Loosening the tie helped somewhat. There was a CBF decrease of 5.7%.

The researchers wrote that there was “a statistically significant decrease of cerebral blood flow after tightening the necktie. It appears that wearing a necktie leads to a reduction in CBF.”

The researchers published their results in the journal Neuroradiology.

Loosen Up for Better Health

This isn’t the first time that studies have found that wearing a necktie is bad for your health. A study published in the Journal of Ophthalmology found that wearing a tie increases fluid pressure inside the eye. This can lead to glaucoma. It’s one of the top causes of blindness.iv

And a study in the British Medical Journal found that ties can be loaded with germs, leading to more colds and flu. Ties often drag across dirty surfaces. And most men rarely wash them.v

The solution is obvious…

Avoid wearing a necktie whenever possible.

And when you do wear one, make sure it is not pulled tight. Unbutton your top shirt button.

You can also try a clip-on tie. There are high-quality options that are hard to distinguish from regular around-the-neck versions.

If you are in a profession where you simply must wear a snug necktie, buy shirts with collars that offer plenty of neck room.

Ties may help make you look sharp, but they certainly aren’t worth the cost to your brain health.