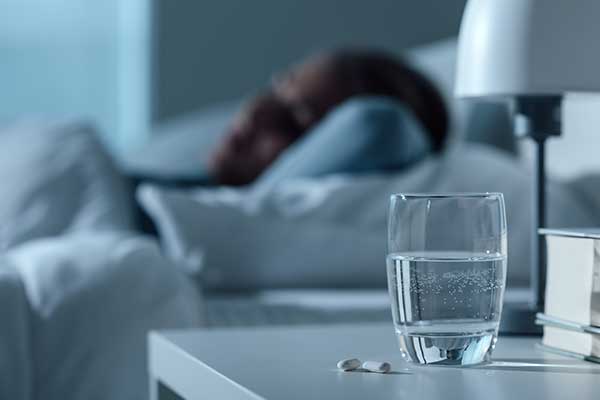 You’ve probably heard about the side effects of prescription sleeping pills.

They can cause dependency…making it impossible to sleep without them. And they are linked to more serious problems as well, like increased risk of cancer and Alzheimer’s.i ii

But none of this stops mainstream doctors from prescribing them. More than a third of American seniors now take sleeping pills.iii

What many of them may not know is that insomnia drugs are especially risky for older folks.

Sleeping Pills Are Riskier Than You Think

Researchers at Cardiff University and Kings College in the United Kingdom reviewed the hip fracture rate for over 6,000 seniors.

They found that those who took sleeping pills had a 250% higher chance of fracturing a hip during the first two weeks they were on the drugs.iv

As time went by, they continued to have a heightened risk. After taking sleeping pills for 30 days, they had a 20% greater risk of hip fracture than seniors not on the pills.

The risk is so high during the first two weeks because of the drugs’ “hangover” effect. Unsuspecting seniors were groggy when they got up. This made them susceptible to falling and suffering broken bones.v

Dr. Ben Carter is a senior lecturer in biostatistics at Kings College. He is lead author of the study.

He said that the pills “significantly increase the risk of hip fractures when newly prescribed by doctors…particularly in the first few days of use.”vi

The study was published in the journal PlosONE.

Sleeping Pills Are a Health Nightmare

Z drugs are so named because most of the drugs begin with Z, such as zaleplon and zolpidem. Benzodiazepines include alprazolam, diazepam, and triazolam.vii

Hip fractures are not often considered with heart disease and cancer as major killers. But more than 300,000 Americans a year suffer a broken hip. About 30% of them will die within a year.viii

And those who survive often lose the ability to live independently. They may end up having to move out of their homes and into assisted living.ix

Natural sleep aids are safer and work better that prescription sleep drugs. Melatonin is probably the one you’ve heard of most. But it really only works to beat insomnia caused by jet lag.

Instead, try these supplements:

Tart cherry: In one clinical trial, a group of insomniacs got an extra hour and 25 minutes of sleep a night while drinking tart cherry juice. It helps your body produce more melatonin naturally, which is safer than taking it as a supplement. Beware of tart cherry juice with added sugar. Instead, look for a powdered extract supplement.

Valerian root: Researchers think it works by releasing GABA in the brain. GABA is a neurotransmitter that boosts mood and has a calming effect on the nervous system.

L-theanine: Human research has shown that 200 mg of L-theanine creates a sense of relaxation about 40 minutes after ingestion.

5-HTP: Psychology Today notes that supplementing with 5-HTP “supports a neurochemical process that can enable high-quality sleep and keep the body’s bio clock in sync.”

Prescription sleeping pills are not worth risk—especially for seniors. Use these natural solutions to get a good night’s rest…safely.