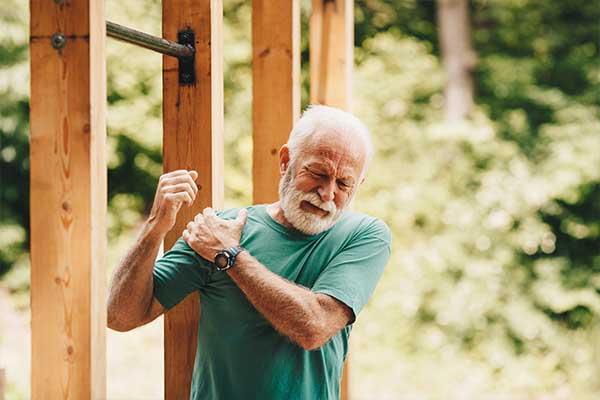 Shoulder pain is one of the biggest health complaints among older people. Each year, more than more than 200,000 Americans have surgery to treat it.

The most common shoulder procedure is called “decompression.” It is supposed to cure or improve “impingement.” This is what doctors call pain and restricted range of movement in the shoulder.i

During the operation, the surgeon threads an arthroscope through a small incision to repair or remove damaged tissue. This supposedly allows easier and pain-free movement.

It seems very straightforward. And you’d think there would be little doubt it’s effective, since doctors perform it so often.

But until recently, there has been surprisingly little research on shoulder decompression surgery. A study in Finland was the first to directly test it compared to a placebo.

Researchers at the University of Helsinki followed 189 patients suffering from shoulder pain for at least three months.

The patients received one of three treatments:

Two years later, the patients were asked to assess their shoulder pain.

Shoulder pain was reduced in all three groups. However, decompression surgery provided no greater relief than placebo surgery.ii

And the exercise group also got about the same pain reduction and functionality as the other groups. The researchers found there were no clinically significant differences among the three groups.

Dr. Teppo Järvinen is a clinical professor of orthopedics at the University of Helsinki. He was the study’s principal investigator.

“These results show that surgery is not an effective form of treatment for this most common shoulder complaint,” he said. “With results as crystal clear as this, we expect that this will lead to major changes in contemporary treatment practices.”

“It seems clear that instead of surgery, the treatment of such patients should hinge on non-operative means,” he added. “We would avoid performing hundreds of thousands useless surgeries every year in the world.”

The study was published in The BMJ.

Shoulder impingement usually occurs later in life. About 21% of seniors suffer from it.iii

It can be the result of years of poor posture…standing or sitting with stooped shoulders. Over the years, your shoulder tissue becomes compressed. This leads to impingement and pain.iv

Dr. John M. Kirsch is author of the book Shoulder Pain? The Solution and Prevention. He says that 99% of shoulder pain can be cured with one simple exercise. It’s called the dead hang.v

The dead hang: The only equipment you need to do this exercise is a pull-up bar or another type of horizontal bar that you can hang from.

Simply hang. Don’t try to do a pull-up.

Start slowly. It may be painful at first. If you can’t do a complete hang with your feet off the floor, do a partial hang. Keep your feet on a stool or the floor while gradually putting pressure on your shoulders.

If you don’t have a bar high enough to stay off the ground, you can use a lower bar and bend your knees. Allow as much of your weight as possible to hang from the bar.

Work your way up to three sets of 30-second hangs per day.

Take a dumbbell or kettlebell in each hand. Your arms and hands should hang straight down at the outside of your thigh.

Stand erect. Relax and round your shoulders so they are stretched downwards by the weights. Either stand in place or walk forward.

Start with a weight and time limit that you can handle. The goal is to ultimately use two dumbbells that total half your weight. For example, if you weigh 200 pounds, your goal would be to carry two 50-pound dumbbells.

Over time, build up to three sets of 30 seconds if you are stationary. If you are walking, walk 30 yards for each set.

Shoulder pain is something that many of face as we get older. Don’t let a doctor perform a useless operation when these simple exercises work just as well without the risks of surgery.

The Mainstream Treatment for Joint Pain Does More Harm Than Good

The Tragic Truth About Prescription Painkillers

Golfers with Knee Pain Should Do This, Study Finds