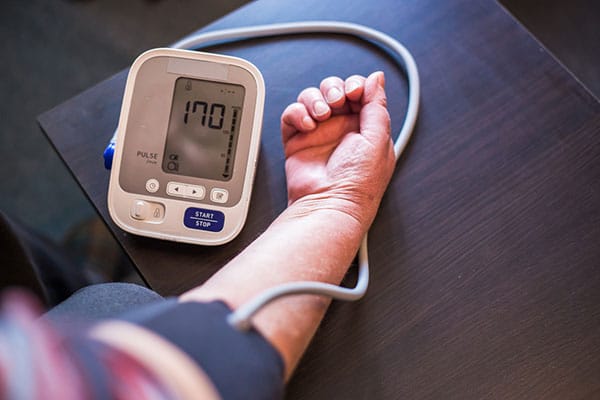 The medications didn’t work very well. His blood pressure readings were often still high. Even worse, the pills made him feel terrible.

“The drugs left me feeling completely exhausted all the time,” said the 49-year-old airport worker.i

So, when he heard about a new, minimally invasive procedure to lower blood pressure, he was interested. And when he learned it would allow him to reduce his medications, or even stop taking them altogether, Raenard was all in.

“I felt I had nothing to lose,” he said.ii

Lower Blood Pressure Without Side Effects

The study divided 989 people with high blood pressure into two groups. One group was treated with renal denervation. The other was given a sham procedure in which doctors pretended to treat them. The patients weren’t told which they received.

When Raenard’s blood pressure readings started dropping a couple days after the procedure, he correctly guessed that he was given the real treatment.

Others in the renal denervation group also had encouraging results. They had an average systolic (upper number) drop of eight points.

During renal denervation, a catheter is inserted into the femoral artery in the thigh. The catheter is then moved into position near a kidney. The doctor uses a device to deliver two or three short blasts of ultrasound to the kidney nerve fibers. The nerves become less active and the kidney sends less water into the bloodstream. This lowers blood pressure.

Typically, only one kidney needs to be treated. The procedure is done under local anesthesia. Patients usually go home the same day. There are few, if any, side effects. And the results seem to last.

Subjects treated with renal denervation in earlier studies more than three years ago still have reduced blood pressure. Researchers believe the benefits may be permanent.

Dr. Ajay Kirtane of Columbia University was a co-author of the study. He said that renal denervation makes sense for people who want to reduce their reliance on medications. “Many people need to take several drugs to control their hypertension, which can have side effects,” he said. “In addition, many people simply don’t want to take additional medications.”v

Common blood pressure drug side effects include not only fatigue, but chronic cough, erectile dysfunction, headaches, and skin rashes.

Find Out If You Are a Candidate

Renal denervation has not been approved by the FDA because it is still considered experimental. But you may be able to get the procedure by enrolling in a clinical trial. Go HERE to find out if you qualify.

Raenard is thrilled with his results. He wasn’t able to quit all his hypertension medications, but he’s down to one pill a day.

“My blood pressure used to stay high after any physical activity, but now it doesn’t, no matter how much I exert myself,” he said. “I have so much more energy now that I’m not on so many drugs.

“I’m really happy this treatment may soon be widely available.”

Editor’s Note: Something strange was happening to pilots training to fly F-16 fighter jets. The ones who went into the program with elevated blood pressure were coming out a few weeks later with normal, healthy readings.

They hadn’t taken any medications… Their diets hadn’t changed… And they hadn’t made any changes to their exercise regimens.

Read our monthly journal Independent Healing to discover their secret—and how you could lower your blood pressure up to 15 points using the same trick.

Blood Pressure: How Low Is Too Low?

How to Get an Accurate Blood Pressure Reading at Home