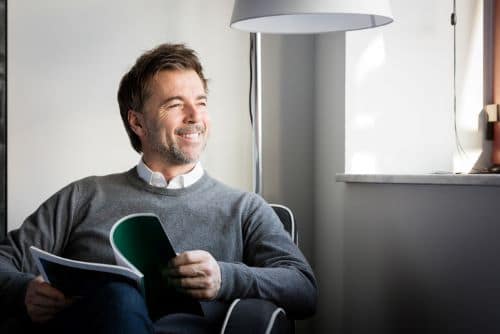 You may already feel the connection…

When you feel nervous, angry, excited, sad, or other emotions, it affects not only your brain. You may also feel it in your stomach.

Now, a major new review confirms the gut-brain connection. And it shows that when you add to the good bacteria in your intestines by taking probiotics, you may also boost your mood.

The research, published in the journal BMJ Nutrition Prevention & Health, looked at data from 71 studies.[i]

Every single one of the studies showed that probiotics are linked to reduced depression symptoms.

The studies also found the supplements can relieve anxiety.

How do bacteria in your stomach improve your mood? Researchers believe it has to do with tryptophan. It’s an essential amino acid that you can’t live without. Probiotics increase tryptophan.[ii]

Your body needs tryptophan to, among other things, produce serotonin, the neurotransmitter believed to stabilize mood.[iii]

Probiotics may ease depression in another way…

By relieving IBS, probiotics may give patients a mental boost, the researchers said.

Probiotics “directly improve depression,” the study authors concluded. But the supplements can also alleviate depression by improving conditions such as IBS that indirectly cause worry and anxiety.[iv]

The results back up a previous study.

Researchers at McMaster University in Canada recruited 44 adults with IBS and mild to moderate anxiety or depression.

After the participants stopped taking either the probiotic or a placebo, they had psychological evaluations and brain scans.

The probiotic group was twice as likely as the placebo group to report fewer symptoms of depression.

Even after they stopped taking probiotics, the mental benefits persisted for another four weeks.

Brain scans showed positive changes to areas involved in mood control, such as the amygdala and fronto-limbic regions.

The Natural Alternative to Antidepressants

But SSRIs can take months to work, if they work at all. Or patients may have to spend years switching from one drug to another, trying to find the one that is effective for them.[v]

All the while they may suffer from debilitating dark moods that make them unable to work or enjoy life.

Even if a patient finds an SSRI that eases their depression, the side effects can make it a mixed blessing. They include weight gain, sexual dysfunction, drowsiness, and headaches.[vi]

In people with severe depression, antidepressants can be life-saving. But for most with mild-to-moderate depression, there’s little evidence that these drugs are effective.[vii]

You’re likely better off with a probiotic. Look for a supplement with at least eight different probiotic strains. They should include:

And make sure your supplement has at least 10 billion live cells per serving. This is a measure of potency.

Big Pharma would like you to think that SSRIs are your only hope for fighting depression. Probiotics are another instance of a natural supplement providing a better, safer solution.