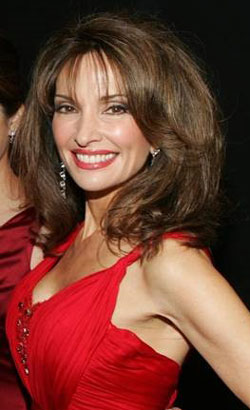 Soap star Susan Lucci looks like the poster child for healthy aging. At 72, she could pass for someone decades younger.

In recent months, Harper’s Bazaar magazine hailed her as “hotter than ever.” Women’s Health called her a “fitness badass.”

But recently, when the “All My Children” actress was shopping, she felt a strange sensation in her chest.

Lucci was in a store, and had just handed her purchases to a saleswoman. Then, she felt a tightening sensation in her chest. She had felt the same thing twice before in the past month or two. But the feeling hadn’t been as strong.

This time, the idea popped into her head that it felt like “an elephant pressing on my chest.”

And she realized she’d heard that phrase before…from a woman describing her heart attack.

It was hard for Lucci to believe something could be wrong with her heart. After all, she sticks to the Mediterranean diet, which is renowned for being heart-healthy.

She had exercised daily for years, following a Pilates regimen.[i]

She’d only ever been in the hospital twice in her life. That was to give birth to her two children.

Tests revealed that the star had not had a heart attack. But one of her two main coronary arteries was 90% blocked. The other was 75% blocked.

She was rushed into surgery. Doctors opened her arteries by inserting stents. The actress is so fit, she was able to leave the hospital the next day. And she performed two days later.

Lucci believes the cause of her blockages was genetic. “My father had calcium build up in his arteries,” she said. “It’s in my DNA.”[ii]

We all feel strange twinges of pain or discomfort from time to time. They may make us wonder if we have a heart issue. Most of the time they are nothing.

Dr. Richard Shlofmitz is Susan Lucci’s cardiologist. He says that if you’re unsure whether your symptoms indicate a heart attack, you should ask yourself these three questions:

Dr. Shlofmitz says that if the answer to all three is yes, you should call 911.

“I had a wakeup call,” Lucci wrote on her Instagram account. “Narrowly missing a severe heart attack, I realized how vulnerable life is and how incredibly grateful I am to be here today.[iv]

She says most heart attacks can be avoided. “You just have to listen to your symptoms and act on them.”

Editor’s Note: Did you know there are five deadly heart attack triggers? And you probably did three of them before lunch! Find out what you need to know in order to avoid a massive coronary or a stroke. Go HERE.

The Key to Staying Alive After a Heart Attack
Diet, Not Age, Makes Your Blood Pressure Go Up
Why Being Short Could Save You From a Heart Attack