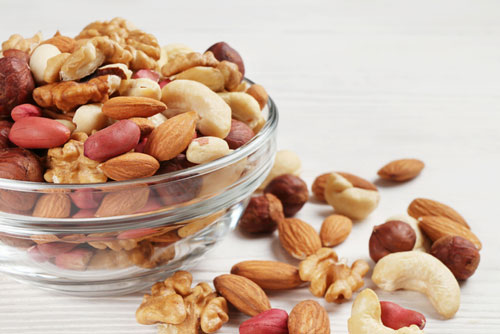 Diabetes is an epidemic in the U.S.

More than a third of the population now has the blood sugar disease or its precursor, prediabetes. That’s more than 114 million Americans.

Diabetes is now the third leading cause of death in the U.S., behind only heart disease and cancer.[1]

What most people don’t realize is that diabetes itself isn’t what usually kills diabetics. More than two out of three people with diabetes will die from a heart attack or stroke.[2]

But a new study shows that one food has the potential to save many of them.

Dr. Gang Liu and his colleagues at Harvard University analyzed diet information from 16,217 diabetes patients. Special attention was given to their consumption of nuts over several years.

There were 3,356 cases of heart disease and 789 strokes among the study subjects.

The researchers found that subjects who ate an ounce of nuts five days a week were:

And the more nuts you eat, the better. Every additional serving of nuts per week lowers risk of cardiovascular death by 6%.

Dr. Liu said, “It seems never too late to improve diet and lifestyle after diagnosis among individuals with type 2 diabetes.”

You’re Nuts if You Don’t Eat Them

For years, mainstream doctors warned patients not to eat nuts because they thought they were fattening. But the Harvard team reports that nuts may be the closest thing there is to a wonder-food. They reduce inflammation, improve blood sugar, and control blood pressure.

Peanuts were included in the Harvard study, although they are technically legumes rather than nuts. But tree nuts were found to have the strongest heart-protective effects. These include almonds, Brazil nuts, pistachios, cashews, pecans, macadamias, and hazelnuts.

To reap the benefits found in the study, eat at least a handful a day.

Editor’s Note: If you have blood sugar issues, there’s something you need to know… Diabetes drugs actually worsen the condition that kills most diabetics. Learn how to protect yourself by reading Independent Healing, your source for unbiased health information.