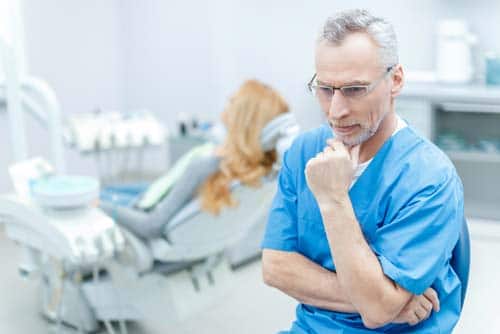 In April 2016, a Virginia dentist called the U.S. Centers for Disease Control.

His life was in danger.

He was suffering from idiopathic pulmonary fibrosis (IPF). It’s a progressive and often fatal lung disease.

IPF causes scarring of the lungs. It can be slowed down, but not reversed. Eventually, it can get so severe lungs can’t get enough oxygen to sustain life.1

There is no known cure.

The dentist was being treated at a clinic that specializes in the condition.

And while he was there, he noticed something strange…

Other patients were also dental professionals. What were the chances of that?

He thought the CDC should investigate to see if there was something in dental offices that was causing lung scarring.2

The CDC concluded that dental professionals are 23 times more likely to get IPF than the rest of the population. They found that just in the one Virginia lung disease clinic, nine dentists and dental technicians were treated for IPF. Seven of them died.3

What is causing dental professionals to contract IPF?

Dr. Randall J. Nett is a medical officer with the U.S. Public Health Service. He is the lead investigator for the CDC.

“At this time, we do not know what caused this cluster of idiopathic pulmonary fibrosis cases in dental personnel,” he said. “More work has to be done before we can make any conclusions.” 4

We can’t say for sure what’s killing dentists. But in 2016, we published a report about indoor air pollution in dental offices. It revealed that when you go to the dentist you often end up breathing a toxic stew of mercury and other harmful vapors.5

Mercury levels in dental offices can reach 30 times the safe limit set by the Occupational Safety and Health Administration.

What happens when you’re exposed to airborne mercury? Lung scarring…the same kind that is killing dentists.6 7

Exposure to mercury, even in tiny amounts, leads to other serious health problems as well. The heavy metal can cause brain damage, tremors, and organ failure.

The high levels of mercury in dental offices would cause any other business to be shuttered. But for years, the powerful American Dental Association has blocked regulation of dental mercury.

Why? It would cost the dental industry big bucks to eliminate or control the dangers.

Even if the Food and Drug Administration banned mercury from dental offices as several European countries have, it wouldn’t eliminate the risk. That’s because 181 million Americans have existing mercury fillings in their teeth.

When dentists repair or replace these old fillings, the mercury is released into the air.

You can protect your lungs when you go the dentist by taking simple precautions.

Mercury is one the world’s most potent neurotoxins… Even tiny amounts can hurt you. Don’t put yourself in danger by choosing the wrong dentist.

Then, when the word of their effective therapies started getting out, something terrible started happening…The doctors started disappearing.