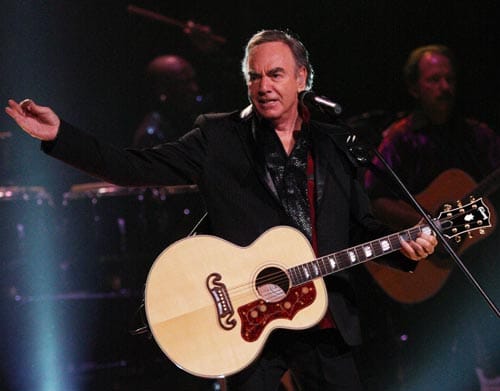 Could one simple exercise save Neil Diamond from the devastating effects of Parkinson’s disease?

The beloved singer, who turns 77 this week, recently announced he is retiring from touring because of the brain condition.

“The onset of the disease has made it difficult to travel and perform on a large scale basis,” a representative for Diamond said. “Based on his doctors’ advice” Diamond canceled the final leg of his current tour.1

During Diamond’s recent public performance on New Year’s Eve in Time’s Square, he looked robust and healthy as he led a packed crowd in a singalong of his hit “Sweet Caroline.”4
Parkinson’s begins slowly, often with a tremor in one hand. Early symptoms also include slurred speech, lack of facial expression, and stiffness while walking.2

As Parkinson’s progresses, tremors and motor problems become more severe. It may become difficult to walk. In the end stages, swallowing may become impossible and a feeding tube may have to be implanted.3

There is currently no cure for Parkinson’s. The standard treatment is the drug Levodopa. It lessons tremors but doesn’t stop the disease from progressing. Patients often hold off taking Levodopa for as long as possible because over time it becomes less effective.

A new study provides hope for patients such as Diamond who are in the early stages of Parkinson’s. It shows that one form of exercise may stop the illness from progressing.

Researchers at the University of Colorado divided 128 early Parkinson’s patients into three groups. All of the subjects had been diagnosed within the last five years. But none had progressed to the point where they were taking medication for their condition.5

One of the groups did a moderate-intensity workout on a treadmill four times a week. They exercised to reach 60-65% of their maximum heart rate.

The second group did a high-intensity workout four times a week. They ran on the treadmill so that they maintained a heart rate of 80-85% of their maximum.

The third group was the control group. They did not exercise at all.

After six months, the Parkinson’s symptoms of the control group and the moderate exercisers worsened.

But the symptoms of the high-intensity exercisers did not change. Their disease did not progress.6

The study was published last month in JAMA Neurology.

Diamond, whose hits include “You Don’t Bring Me Flowers” and “Cracklin’ Rosie,” said he hopes to continue writing and recording as long as he is able.

In a statement to his fans, Diamond said: “I have been so honored to bring my shows to the public for the past 50 years.”

Editor’s Note: If you’re worried about healthy brain aging, there’s something else you should know…