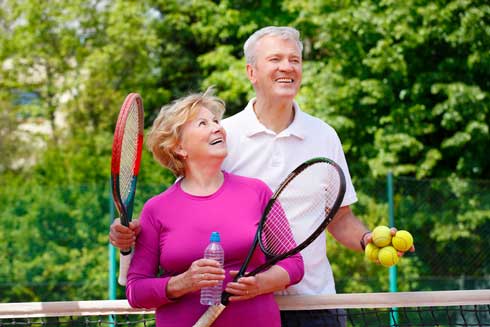 It’s settled science that exercise eases depression. But a new study shows your workout doesn’t have to be exhausting to get the mood-lifting benefits.

In one of the most extensive studies of depression ever, researchers have found that you need less than 10 minutes of exercise a day to stave off depression.

The international study involved researchers from Britain, Australia, and Norway. It was led by the Black Dog Institute. It’s a highly respected not-for-profit mental health research center in Sydney, Australia.1

Researchers followed 33,908 Norwegians for 11 years. The subjects were regularly asked to report how often they exercised and at what intensity. And they self-reported any depression.

Scientists found that the people who did not exercise were 44% more likely to suffer from depression compared to those who exercised at least one hour per week.

The study’s lead author is Dr. Samuel Harvey. He’s an associate professor of psychiatry at The University of New South Wales in Sidney.

“These findings are exciting because they show that even relatively small amounts of exercise can deliver significant protection against depression,” Dr. Harvey said. “Most of the mental health benefits of exercise are realized within the first hour undertaken each week.”2
The study recently was published in the American Journal of Psychiatry.

Antidepressants Can Send You to an Early Grave

Despite its effectiveness, the first-line treatment against depression in the U.S. is not exercise. It’s antidepressant drugs. About 12% of Americans take them.3

And the side effects of these drugs can be deadly. A recent Canadian study found that antidepressant users had a 33% higher risk of death from any cause than non-users. This included a 14% higher risk of heart attacks and strokes.

Antidepressants such as Prozac, Zoloft, Celexa, and Lexapro increase levels of the feel-good chemical serotonin in the brain. But these drugs also block the absorption of serotonin by the body’s other major organs…such as the heart, kidneys, lungs, and liver.

Researchers warn that this lowering of serotonin in the body can keep multiple organs from functioning properly.

The new study finds not only that you don’t have to exercise for long to lift your mood… You also don’t need a super-strenuous workout. Walk, bike, jog, play tennis, swim, do resistance training—do any activity that gets your heart pumping at a moderate level. The key is to do it for at least one hour per week.

You can do it all at once or break it into short bursts.

There are also supplements that have been proven to treat depression. They are natural, have no side effects, and are available at most health food and drug stores.5

St. John’s wort. This herb naturally balances the brain’s levels of the neurotransmitters norepinephrine, serotonin, and dopamine. Take it twice a day for a total dosage of 900 to 1,800 mg a day.

5-Hydroxytrptophan (5-HTP). This amino acid works well with depression that is combined with anxiety. It boosts the body’s natural production of serotonin. It has also been found effective against insomnia. Suggested dosages are 100-200 mg taken twice per day.

SAMe. This naturally occurring amino acid-based chemical facilitates healthy nerve connections and boosts neurotransmitters. Some holistic doctors recommend it for older patients. This is because it has beneficial effects on arthritis and joint pain as well. Dosages typically start at 200 mg twice daily.

Editor’s Note: Antidepressants may put your health at risk. But they aren’t the only dangerous drugs you need to be aware of…