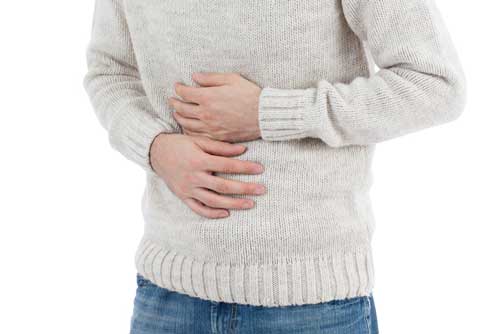 That’s the finding of a new Yale University study that gives hope to millions of Americans who suffer from the painful, hard-to-treat stomach condition.1

Up to 20% of American adults suffer from IBS. It causes chronic stomach pain, gas, diarrhea, and constipation.2

Yale scientists recruited 58 patients with IBS for a double-blind, randomized clinical trial. They sent blood samples from each patient to a commercial laboratory for analysis.

The lab used a food-sensitivity test called Alcat. It measures immune cell activation in response to individual foods. In other words, it shows if a person is allergic to certain foods.

Half of the patients were assigned to an individualized four-week diet that was consistent with their Alcat test results. They were not allowed to eat any foods that caused immune cell activation. Any other foods were fine.

The other half were assigned to an individualized four-week diet that was inconsistent with Alcat test results. The diet allowed some foods which caused immune cell activation and eliminated some which did not.

After several weeks, the researchers assessed quality of life and IBS symptoms in both groups.

Dr. Ather Ali is assistant professor of pediatrics and of medicine at Yale School of Medicine. He is a lead author of the study. “We didn’t expect results like this,” said Dr. Ai. “The people who consumed the diet consistent with the test did significantly better than people on the sham diet.”

The people on the Alcat-based diet reported far less abdominal pain and bloating.

The study was published in the journal BMJ Open Gastroenterology.

Many patients with IBS try diets based on blood tests that claim to identify foods that trigger their symptoms. But the majority of these food intolerance tests have not been validated by rigorous study, the researchers said.

Previous trials have shown promising results for a low-FODMAP (fermentable oligosaccharides, disaccharides, monosaccharides, and polyols) diet. This is an eating plan that eliminates gluten-containing grains, legumes, allium vegetables (like onion and garlic), dairy, and high-sugar fruits.

But with a FODMAP diet, there usually is no testing. So patients may continue to eat foods they can’t tolerate. And they might eliminate others that are fine.

Until the new Yale study, no randomized trials had been published assessing the effectiveness of immune cell activation testing in IBS patients.

Many IBS medications are ineffective or even make symptoms worse.

For example, there’s Amitiza. It relieves constipation. But it often causes more problems than it fixes. It can induce stomach pain, diarrhea, and nausea.

And antidiarrheal IBS pills like Lotronex can cause constipation, heartburn, and hemorrhoids. It’s no surprise 70% of IBS patients opt out of treatment.3

A better option is vitamin D supplementation. Lack of the nutrient is strongly linked to IBS. A new study out of the University of Sheffield found 82% of IBS patients don’t have enough of the nutrient. Make sure you take D3. It is more effective than other forms.

How to Get the Alcat Test

The commercial laboratory used for the Yale study is Cell Science Systems in Deerfield Beach, Fla. The laboratory’s network includes more than 3,000 practices.4

Go to the company’s website to find out where to get the test in your area.

It requires a simple blood draw. Because Alcat testing is still considered investigational, it’s generally not covered by insurance. It costs around $500.5

After you get the results, you simply eliminate in the foods that showed an immune response. As study subjects found, it may take several weeks on the diet before you start to get relief.